World Boxing News has officially named boxing legend and undefeated five-weight world champion Floyd Mayweather the Fighter of the Decade for 2010 to 2020.

Mayweather beat off competition from Andre Ward and Canelo Alvarez to claim the coveted crown for an unbelievable career from 2010 until retirement in 2017.

Losing out to Manny Pacquiao between 2000 and 2010, there’s no doubt Mayweather deserved to win this time around.

Boxing has been raised to another level by the superstar, who is planning a comeback in the coming months.

The CASE FOR MAYWEATHER:

Mayweather truly transcended the sport during this period and basically made boxing what it is today with the checks involved.

The ‘Money’ man, alongside defeating eight world champions during the decade, elevated the profile of the sport to new heights.

Earning almost ONE BILLION dollars in the ring, Mayweather hit 50-0 and kept his case to be named the ‘Greatest Fighter of All Time’.

For WBN, Mayweather may well have already banked the best defensive title long ago.

The 42-year-old began in 2010 with a victory over Shane Mosley before signing a ground-breaking six-fight deal with Showtime. The contract was the first of its kind anywhere in the sport.

Some expected Mayweather to merely fight six also-ran contenders due to being 32 at the time. In order for the American to just walk away with pockets full of dollars.

To the ultimate contrary, Mayweather went on a spree of defeating the best around at that time.

Beginning with his weakest bout of the six, Mayweather took out Victor Ortiz with some controversy attached. Headbutts and a blindsiding blow may have needed a closer look by the World Boxing Council when the incident unfolded.

But with Ortiz banking a healthy check, and Floyd being Floyd, everything moved on pretty fast. 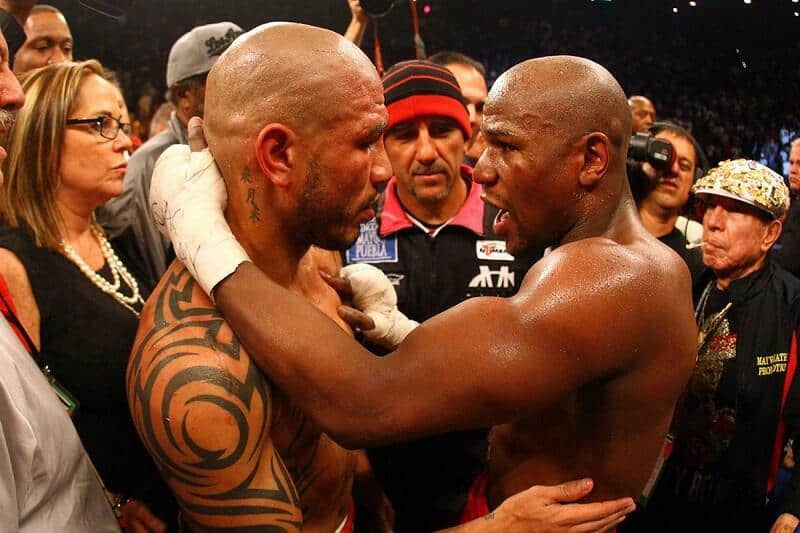 Up next was a super-fight of that time against Miguel Cotto. Many expected Mayweather to be severely tested by the Puerto Rican legend at the height of his powers.

None of it though, as Mayweather dominated yet again.

A similar performance against Robert Guerrero led Mayweather into a victory that has aged well ever since.

Canelo Alvarez, now one of the greatest of the modern era, was beaten by Mayweather in a better fashion than the majority decision scorecards suggested.

Never one to shirk a challenge, Mayweather fired straight into Argentinian hardman Marcos Maidana in 2014.

Maidana arguably gave Mayweather his toughest night in years and eventually earned a lucrative rematch. Losing both, Maidana would sail off into the sunset.

Knowing his career was winding down, Mayweather finally faced nemesis Manny Pacquiao in 2015. Another superb victory that has gotten better when you see where Pacquiao is now.

Once again, Mayweather took control of the fight despite Pacquiao stating a shoulder injury hampered him. The fans may have been robbed of the best spectacle possible due to the ailment but there was no arguing with the result.

Four years later, and Pacquiao is still at the top of his game, which is a testament to just how good Mayweather was and potentially still is. Let’s hope they do it one more time in 2020.

The less said about the triumph over Conor McGregor, the better. But Mayweather once again did what nobody else could do and crossed two sports over to bank himself a nine-figure paycheck into the bargain.

Certainly the Fighter the of the Decade. In years to come, Floyd could well be the Fighter of the Century.

Phil Jay is Editor of World Boxing News and an Auxiliary member of the Boxing Writers Association of America. Follow on Twitter @PhilDJay