Boxing legend Manny Pacquiao is set to be crowned WBN Fighter of the Year 2019 after smashing the voting to pieces over the past nine days.

Pacquiao, who enjoyed a stellar year with victories over Adrien Broner and Keith Thurman, was initially in fourth place after two weeks of voting.

Firstly, beginning on December 10, eight boxers were initially shortlisted for the award. However, Josh Taylor and Canelo Alvarez went blow-for-blow at the top.

Taylor was then removed after admitted a charge of racial abuse in a UK court of law. Naoya Inoue then possessed the only challenge to Canelo.

Just before Christmas, Filipino fans began to get wind of the poll and that was all she wrote. Firmly getting behind their man, Pacquiao sailed into an unassailable lead with a few days.

Unless something amazing transpires, the ‘Pacman’ is set to be crowned the winner in three days’ time on January 7th.

Vote from the candidates below:

The current unified welterweight champion defeated Mikey Garcia and Shawn Porter. Therefore, cemented his place as one of the best pound for pound fighters on the planet. Spence’s latter fight with Porter will go down as one of the greatest in 2019.

On the back of beating Gennady Golovkin controversially in 2018, Canelo went on to further unify at middleweight. The P4P #1 then defeated Sergio Kovalev at 175 pounds. Canelo is now one of just a few Mexican fighters to win world titles in four weight divisions.

The ‘Pacman’ returned to the forefront big time in 2019. After a couple of years in the wilderness on the back of losing to Floyd Mayweather, Pacquiao came back with a vengeance. Wins over Adrien Broner and Keith Thurman proved life can begin at 40 for some.

‘The Bronze Bomber’ built on his draw with Fury in December with two stunning knockouts. Dominic Breazeale was dispatched in a round before Luis Ortiz even more convincingly than the first. Wilder’s ten world title defenses and all-round excitement mean the American now the number one heavyweight in the world.

Back holding all the aces at 200 pounds plus after capitulating badly against Andy Ruiz Jr. in June, redemption was certainly sweet for Anthony Joshua. Boxing his way to a victory against a massively overweight Ruiz in their rematch means Joshua is once again clutching four world titles.

What a year for Naoya Inoue. Knockout after knockout and impressive performance in the WBSS was followed up by a legacy-altering match-up with Nonito Donaire. The pair went hell-for-leather in a bid to claim the Ali Trophy, with Inoue coming out on top to the delight of his home crowd.

NOTE: Josh Taylor votes no longer count as he was removed from the poll. 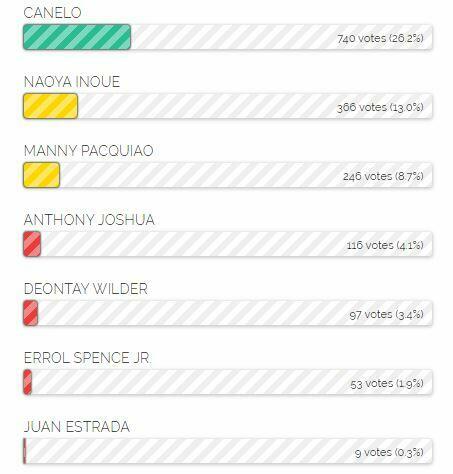