The event streams live and exclusively on UFC FIGHT PASS® beginning at 2 p.m. ET as Manfredo Jr. (41-7-1, 22 KOs) returns to the ring for the second time in two weeks to face hard-hitting Colombian veteran Milton Nunez (37-22, 32 KOs) in the 10-round main event.

Manfredo Jr., the star of Season 1 of the reality television series The Contender and former IBO world middleweight champion, ended a three-year layoff November 23 in Rhode Island with a first-round knockout win over Melvin Russell, his first victory since 2013.

Starring in the co-main event, Worcester, MA prospect Gonzalez (12-2, 9 KOs) returns to Foxwoods for the third time in 2019, this time in a six-round bout against Omar Ethridge (3-2-1, 3 KOs) of Greensboro, NC. Saturday’s fight is Gonzalez’s third appearance with CES Boxing and first since 2016.

Doors open at 11 a.m. ET for this special afternoon event beginning with a spectacular amateur card at noon followed by the main card at 2 live on UFC FIGHT PASS.

In anticipation for Saturday’s season finale, CES Boxing will host a final press conference and weigh-in Friday at the Fox Theater. This event is open to the public. 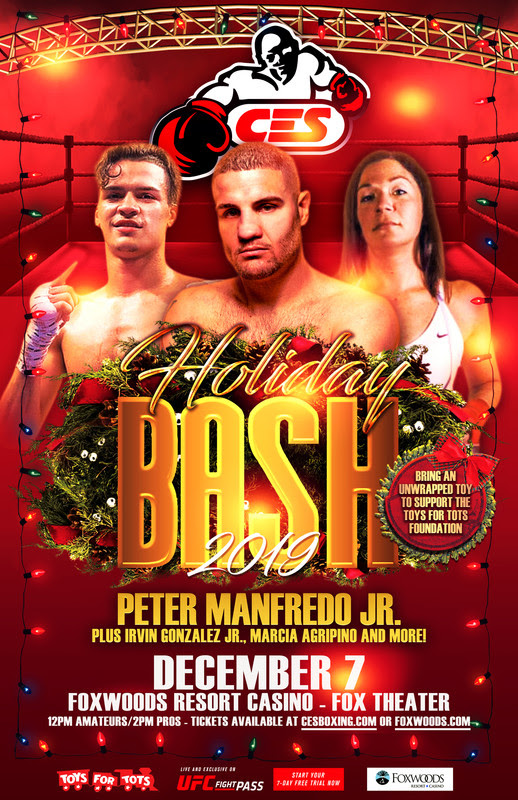 Manfredo Jr. returns to Foxwoods on Saturday for the first time in more than a decade. He is 7-0 lifetime at the venue, beginning with a knockout win over Cornell Hester in his third professional fight in December of 2000. Four years later, Manfredo Jr. captured the NABO super welterweight title at Foxwoods, knocking out Sherwin Davis in the sixth round of their scheduled 12-round bout. In his last fight at the venue in 2007, Manfredo Jr. defeated veteran David Banks by unanimous decision live on ESPN2, a fight card highlighted by a scintillating rematch between female super lightweights Jane Couch and Jaime Clampitt.

Also highlighting the main card is a potential Fight of the Night candidate between standout featherweights Nathan Martinez (6-0, 2 KOs) and Reading, PA, veteran Yeuri Andujar (4-2, 3 KOs), who battle in a six-round bout, plus the long-awaited return of New London, CT, fan-favorite Marcia Agripino (3-2-1), who faces Massena, NY, native Michelle Cook (1-1-2) in a six-round rematch of their 2013 bout, which ended in a draw.

The 20-year-old Martinez is back for the fourth time this year following a thrilling unanimous-decision win over Steve Garagarza in Hartford in October. Andujar makes his second appearance with CES Boxing; he faced unbeaten Ricky Delossantos in August.

The Agripino-Cook rematch is six years in the making. The two fought to a draw in Cook’s professional debut. Saturday is Agripino’s fourth appearance at Foxwoods, where she is unbeaten in three fights, including wins last year against Stephanie Essensa and Kay Hansen.

In four-round bouts, super lightweight Carlos Ojeda-Perez of New Haven, CT, makes his professional debut against two-time South Carolina Golden Gloves champion DelQuan Dennis of Columbia, also in his pro debut, while Joseph Goss (1-0) of Bridgeport, CT, fights for the first since February of 2018 in a super lightweight showdown against Montreal’s Samuel Lajoie-Dery, who makes his pro debut.