Tyson Fury’s foray into the wrestling world has proven to be a public relations masterstroke ahead of the boxer’s Pay-Per-View debut.

Social media announcements made on Friday saw Fury and the WWE benefit from extensive buzz surrounding a match with Braun Strowman.

Fury and Strowman will go head-to-head at Crown Jewel in Saudi Arabia on October 31. The clash will be a co-headline affair.

Lesnar and Velasquez became a reality in 2019 when the latter sign up for AAA Lucha Libre, instantly putting him on Vince McMahon’s radar.

Going face-to-face, Fury and Strowman had promised to keep it light after several run-ins over the past week. 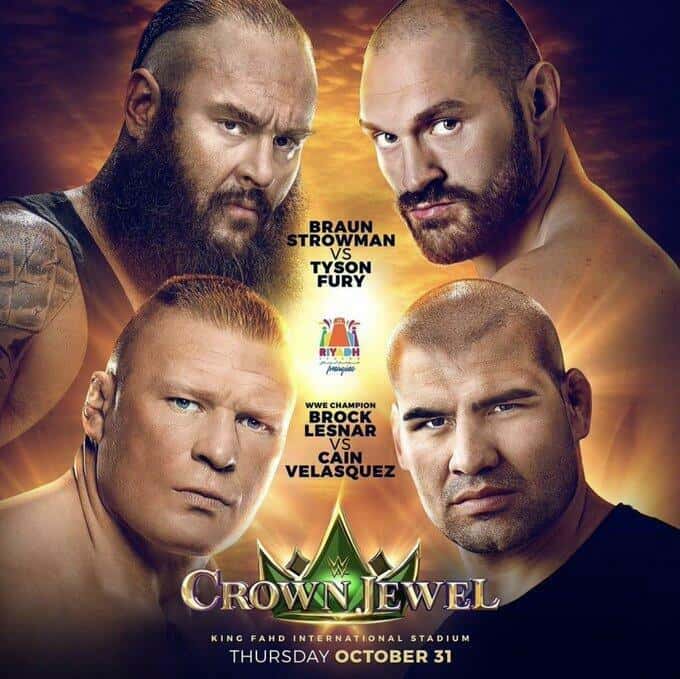 .@Tyson_Fury is making the most out of his @WWE experience as he prepares for @BraunStrowman at #WWECrownJewel. pic.twitter.com/XdPoXzPJPe

A venture into the world of WWE has long been speculated for Fury. Something WBN predicted back in 2017.

WBN offered Fury vs Lesnar for the Floyd Mayweather vs Conor McGregor cross-codes battle. It was always thought ‘The Gypsy King’ could crossover to UFC or WWE.

This falls into place nicely for Vince McMahon. Alongside HHH, Vince has always had a soft spot for pugilism.

Mayweather and Mike Tyson paved the way for Fury’s appearance, having been involved in massive storylines previously.

It now comes down to Fury to nail the in-ring performance. Which sadly, thus far has been the lowest point of his involvement.

Criticism from die-hard WWE and boxing fans can easily be shrugged off by Fury. Who at the end of the day, is never going to be able to mimic the professionals.

The run is simply a gimmick. But as things have transpired, Fury has sparked enormous interest in the company from a new angle.

Pressure from Chris Jericho’s AEW brand has forced WWE into a revamp. That’s where the likes of Fury and Velasquez enter the fray.

Dwayne ‘The Rock’ Johnson was also persuaded to return from exile on the new ‘Friday Night Smackdown’ slot despite breaking out of the genre to become the highest-paid actor in Hollywood.

In a nutshell, linking up with Bob Arum at Top Rank has seemingly been the best decision of Fury’s career thus far. He’ll have the chance to further enhance his reputation in the coming weeks.

Roll on October 31 as it should be quite a show!