In a traditional move, WBC President Mauricio Sulaiman hands out straps to the boxers competing around the two Mexican dates in the calendar.

Earlier this year, Canelo Alvarez took home a trinket for his win over Daniel Jacobs. This fall, a ‘Maya Belt’ was created.

Due to several high profile contests taking place, the WBC decided to give away two titles, one to the Fury v Otto Wallin winner and the other to Munguia versus Patrick Allotey.

Confirming their intention, the WBC said: Two Edition Two Maya Belts will be up for grabs in the fights between Jaime Munguia Vs Patrick Allotey in Carson, California and on the very same night of September 14th with Tyson Fury Vs Otto Wallin in Las Vegas.

The World Boxing Council made the announcement in the epicenter of hard knocks…The Chamber of Deputies in the heart of Mexico City.

Mauricio explained that the WBC Board of Governors had been tied in votes for which fight most deserved this special status. Therefore both had been chosen.

Mauricio also said: “This is a very significant event. Congressmen have joined us. They themselves get into the political ring, with their shares of blows in their day to day work.

“I feel very honored to have our Boxing Community. Along with the Congressmen and Congresswomen in a very special ceremony for the Mayan Belts.

“These belts are tremendous works of art which has Mexico`s heart in it. And whoever wins them will take them home and cherish them for the rest of their lives. It is a piece of history for Eternity.

“The Governors` choice was a draw. But no instant replay needed in this one. And we feel it`s only fair to award two different belts to two different cards.” 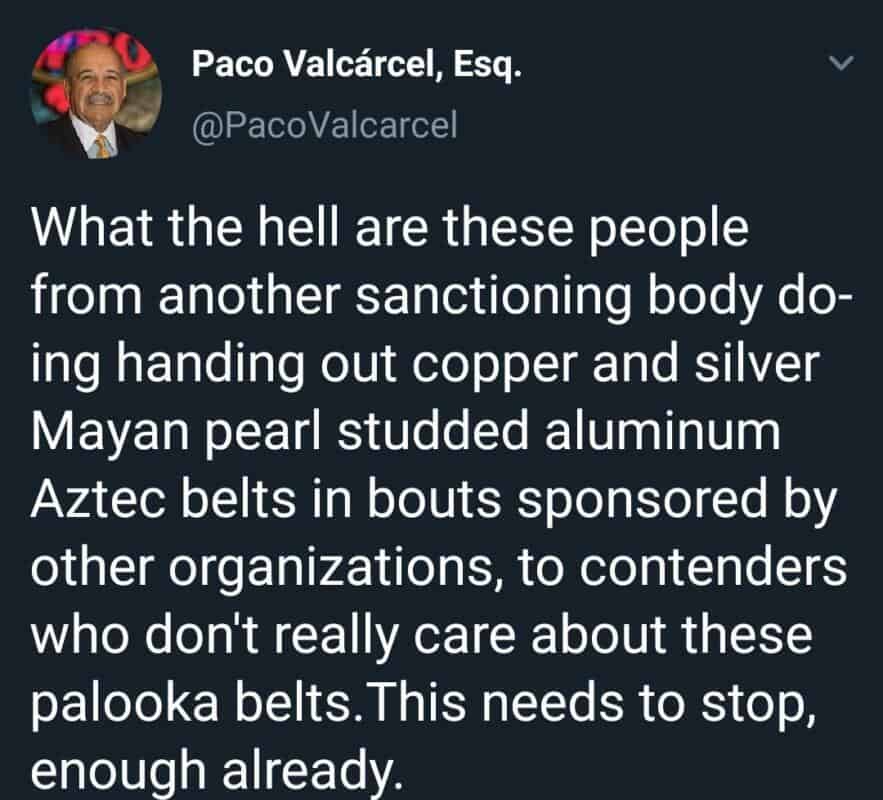 Paco Valcarcel, head of the WBC’s rivals at the WBO, met the news with complete wrath.

“What the hell are these people from another sanctioning body doing handing out copper and silver, Mayan, pearl-studded, aluminum, Aztec belts in bouts sponsored by other organizations, to contenders who don’t really care about these palooka belts.

“This needs to stop, enough already,” he added.

Munguia defends his WBO championship on the night. The Fury fight is a non-title warm-up for Deontay Wilder.