After a tumultuous spell under Frank Warren fighting on Boxnation, the British-born boxer of Indian descent parted company with the hall-of-fame promoter due to a lack of fights.

It was a brave move from a position of promotional comfort. Since then, Patel has become the most active UK boxer around.

“When I was with Frank Warren, I had two fights a year,” Patel exclusively explained to World Boxing News.

“As a young fighter trying to make something of himself in the sport – that’s just not enough. It just felt to me like they were just waiting to throw me in a big 50/50 fight. That doesn’t help me; that would help them.

“I needed progression for my career. I needed the right fights at the right time. If they weren’t willing to do that for me, I was looking to find someone who would. If someone wasn’t, then I’ll just do it myself. I would never have signed with them if they told me I’d be fighting once or twice a year.”

That decision led to a world tour of sorts. Fights across the globe in Egypt, Czech Republic, Latvia and predominantly Hungary have seen Patel build himself a decent record built on wins against a varied mix of opponents. Those fights weren’t always easy to find.

“It was very difficult,” he explained. “I didn’t know many agents in the sport or managers to speak to. I just had to engage my brain and think of promoters and managers to contact.

“It’s been very difficult. I don’t classify myself as a manager or a matchmaker or anything, but I’ve had to do that and help develop my career.”

Someone else currently on a tour fighting all over the world is former British super-lightweight champion, Ashley Theophane. He and Patel fought on a show in Hungary with the proceeding story giving us an idea of how unprofessionally run some regions can be.

“I fought an African out there with a positive record. I won, Ashley won as well and our fights didn’t even go on Boxrec,” he pointed out.

“The opponent that I fought, he boxed Andrew Moloney a couple of weeks ago and he boxed Zolani Tete’s brother; he went five rounds with him. I managed to get him out of there in 45 seconds including the count, but it just isn’t on Boxrec!”

In another case of unprofessionalism abroad, Patel’s most recent bout saw the first-round shockingly last 4:45 before the bell was rung. He’s taken those moments of madness in his stride.

The twenty-six year-old is not only a well-travelled student of the game nowadays. He fights in a very different manner. Gone is a degree of the swagger that alienated fans early in his career.

“His trainer Barry Smith has helped develop Patel into a brand-new fighter.

“Back when I was with Frank Warren, I was fighting with my hands low, switch-hitting. That’s not really a style the UK public like to watch. My current style’s a lot different to that. It’s more aggressive, more trying to work the body.

“I believe that’s the sort of style that UK fans tend to grab on to. So, I’m hoping to get a few rounds in Saudi and demonstrate some of my work.”

The aforementioned bout in Saudi Arabia is an historic one. Patel has the opportunity to become the first boxing world champion of Indian descent.

The IBO’s bantamweight world title has previously been held by Vic Darchinyan and Abner Mares.

“Obviously, (there’s) a lot of weight on my shoulders and I look forward to achieving it – a childhood dream,” he proudly proclaimed. 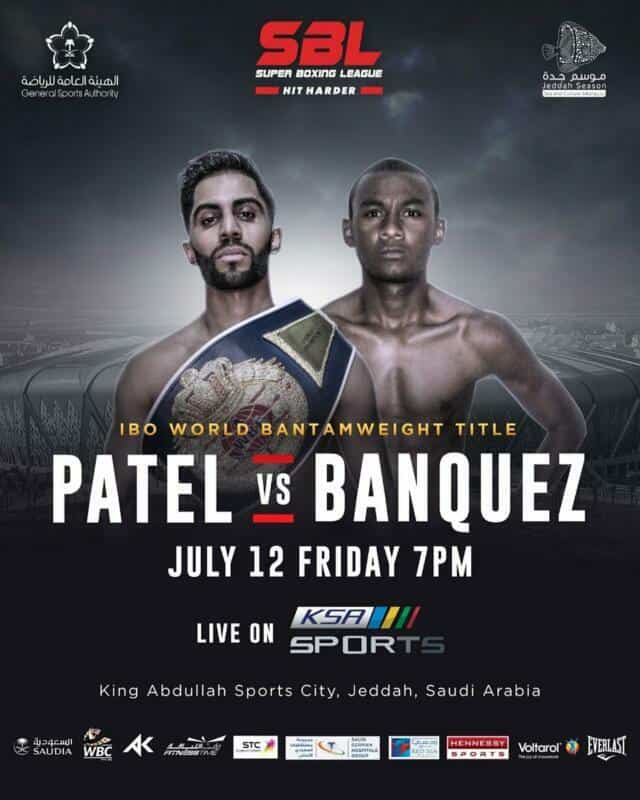 The man standing in the opposite corner on July 12th will be Michell Banquez. The Venezuelan has a similar record and knockout percentage to Patel, thus he’s expecting a tough night.

“Well, he’s world-ranked (as a super-flyweight) with the WBA, so he’s obviously got to be of a good quality. He’s South American and I’m guessing he’s going to be bringing some machismo, but that’s ok because if he does bring it – I can bring machismo back. We can both stand there and exchange.”

The fight will be broadcast live in the UK on Channel 5. It will be a first glance of Patel on UK televisions since 2016. Back then, he was a showman looking to get himself noticed by any means necessary.

He’s no longer the ‘pantomime villain’ he was once perceived to be and a championship victory will validate his career choices.

“Personally, I don’t really care if people agree with what I have done,” he said. “For me, it’s more about self-satisfaction. I set myself some goals as a kid to become a world champion, so, once I do that, I’ve fulfilled one of my goals. After that, I want to unify and step up a weight.”

Following bold claims of wanting to unify and move-up in weight, I questioned Patel if he was beginning to outgrow the division, but that’s not the case.

“In January, it was a struggle to make the weight, but that’s because I done the weight wrong. In May when I made it in Egypt – it was pretty comfortable. I’m comfortable at the weight. It’s just that I don’t want to sound big-headed, but I’m really, really strong for a bantamweight.

“If I was to look at my lifts in the gym; if you were to compare it to featherweights or even super-featherweights, I’m lifting more than them. I can squat more than these sorts of guys. I’m strong enough and big enough to go to those weights and it’s easier to make the weight, so it would make sense to go up and fight at them weights as well.”

We then looked at a couple of potential future opponents, should he despatch Banquez and claim the gold. Former IBO and IBF world champion, Joseph Agbeko tops his wish-list, as well as a current titleholder.

“That’s someone I would like to fight after, to be fair, Joseph Agbeko. He’s No.1 with the WBO and Zolani Tete hasn’t defended the WBO (title) since October of last year. If he doesn’t defend it anytime soon, me and Agbeko could maybe fight for a unification, the WBO vacant and the IBO when I win it.”

It’s been a long time since the confident Prince Patel moved away from his comfort zone to go and build his way up to find chances and opportunities.

Friday July 12th is the setting for him to show the world what he’s really about. Expect him to grasp it with both hands.

“If I’m honest, (I’m) a completely different fighter to start with. I’m more about business now. I want to get straight down to it rather than having my hands low and showing off, but I just basically want to inflict pain and knock someone out,” Patel emphatically concluded.