Oscar De La Hoya has sensationally claimed the rematch between Andy Ruiz and Anthony Joshua has run into problems.

De La Hoya hit out over Hearn mentioning Canelo Alvarez being named WBC ‘Franchise champion’. Also for Canelo not agreeing to face Gennadiy Golokvin in a third installment this year.

“Eddie Hearn, let me worry about Canelo and his next opponent, which doesn’t involve you,” said De La Hoya. “You worry about securing the rematch for Joshua with Ruiz for DAZN. Which I hear you are having problems with.”

It didn’t take long for Hearn to respond. The Matchroom head honcho offered a wager to his DAZN rival.

“Friendly bet. My fight gets made before yours,” asked Hearn. 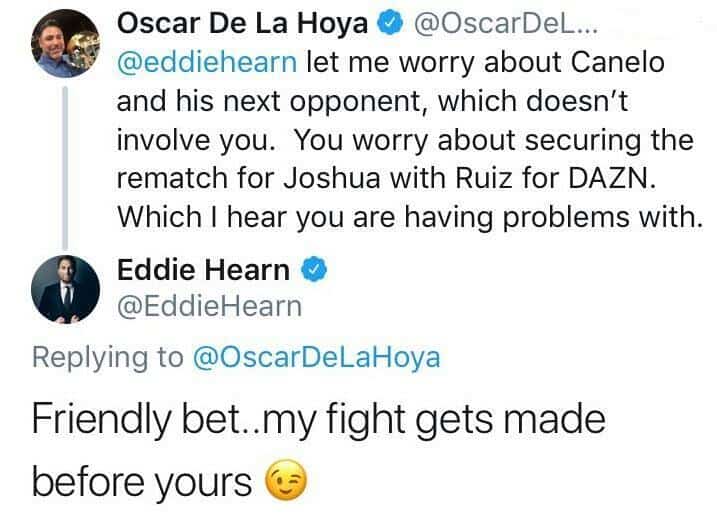 Both Canelo and Joshua are in the process of securing their next outings. Mexican superstar Canelo is linked to a clash with Sergey Kovalev at 175 pounds, news WBN broke on June 24th.

Kovalev has been vocal in his desire to trade blows with Canelo. It’s a fight which would take place in November or December.

The big-hitting Russian has a mandatory to deal with first of all. Something promoter Kathy Duva informed WBN is almost a done deal.

“The Yarde negotiations are moving forward between the promoter in Russia, RCC, and Queensberry – who represents Yarde,” Duva exclusively told World Boxing News.

“I heard from both sides yesterday that they have come to terms on all of the contract provisions.”

As for Joshua, an agreement to take the fight back to New York has been in the pipeline ever since the first fight.

Hearn was keen on Joshua aiming for revenge on home soil, with only the Principality Stadium in Wales a solid option.

Las Vegas emerged as a sound alternative late last week as both sides continue their attempts to thrash out a deal for the back end of 2019.

As for De La Hoya and Hearn, the rift seems as strong as ever.