Abel Sanchez believes Murat Gassiev has the opportunity to score a statement win next month when the Russian makes his heavyweight debut.

Gassiev is pitted against the now notorious Joey Dawejko. This comes fresh from furor of a sparring knockout scored against former top division king Anthony Joshua.

As WBN was informed at the time, Dawejko dropped AJ hard in a training session. The damage was done not long before the fight with Andy Ruiz Jr. on June 1st.

We all know what happened next as Ruiz took Joshua’s clutch of championship belts.

Ahead of the fight, set to go down at College Park Center in Arlington, Sanchez was asked for his take on the WBN report.

“Nobody is denying that Anthony Joshua was knocked out in training against Joey Dawejko, so it’s up for discussion,” Sanchez exclusively told World Boxing News.

“But that makes it a statement if Murat is able to dominate and stop Joey when they fight.”

On how training for his first foray above 200 pounds is going, Sanchez added: “Murat is very comfortable. He feels strong. His hand speed will be a plus.

“Now it’s just a matter of getting in there and testing the waters.”

Dawejko has lost seven times as a pro. Despite this, the 29 year-old has extra intrigue to his persona on the back of the Joshua incident.

Sanchez sees the Philadelphian in the same vein. But it won’t detract from Gassiev aiming for his usual early finish.

“It’s a good first fight into the heavyweight division for Murat. Joey has not been KO’d in any of his losses, so it would be a good sign if Murat is able to,” concluded Sanchez. 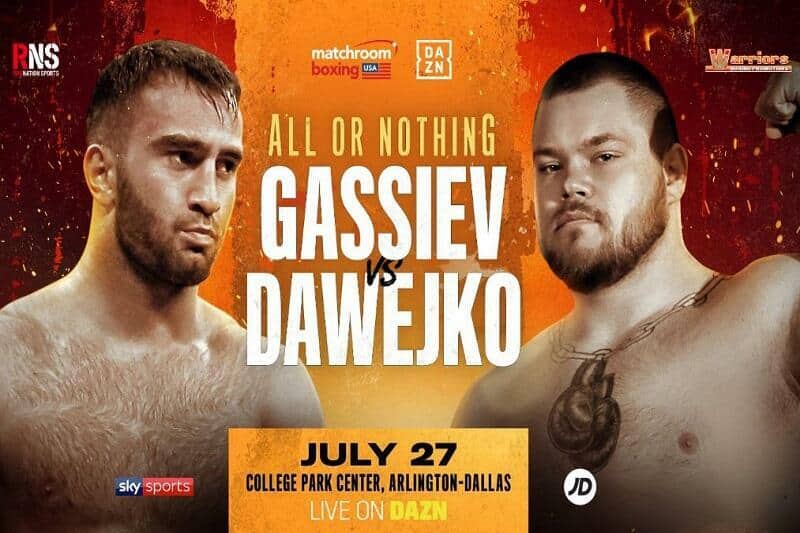 As a cruiser, Gassiev lost just once in 26 fights, and that was against the number one and ex-undisputed king Oleksandr Usyk.

Still just 25, ‘Iron’ has plenty of time to grow into boxing’s most lucrative weight class. Already a unified champion during his career, Gassiev will be fancied to cause a few upsets once his finds his stride with the big boys.