Duhuapas, who marked up Wilder in a one-sided loss back in September 2015, has thrown his hat into the ring for the fall.

Fury is set for battle at Madison Square Garden or Barclays Center on September 21 or October 5th.

The Frenchman is determined to land the fight for his return.

“I would like to fight Tyson Fury in November or December, but if he makes an offer for earlier I have no problem,” Duhaupas exclusively told World Boxing News.

“After I fought Deontay Wilder for the world title in 2015, I wanted to fight Fury in 2016 when he was champion. Unfortunately, it did not happen.

“I want to feel the sensation when I beat him over twelve rounds. It would be a beautiful victory for me.

“Who knows, maybe I can win like Andy Ruiz Jr. won against Anthony Joshua?

“I am determined to finish my career with a big fight and win. Fury or another big fighter would be great for me.” 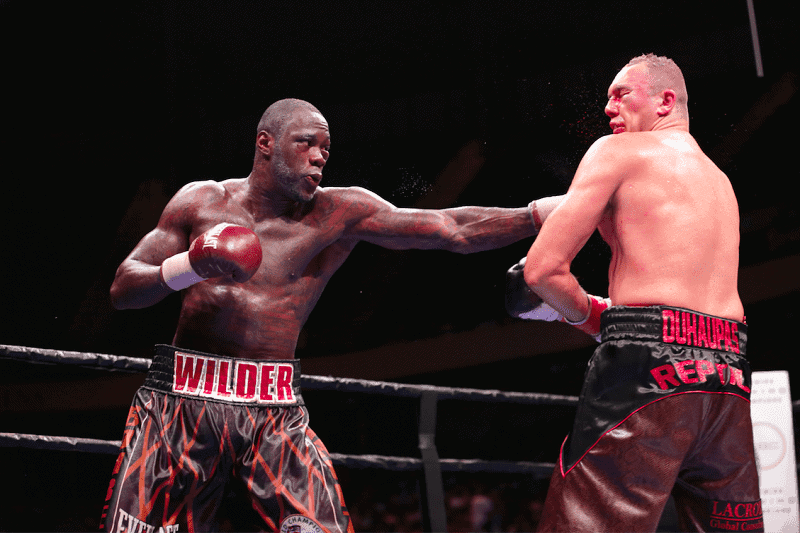 Despite Wilder halting him in the eleventh, Duhaupas was lauded for his guts in the fight. He also gave Wilder a swollen eye for his trouble.

‘The Reptile’ has been out of the ring since losing to Jarrell Miller in 2018. As he explained to WBN earlier in the week, he’s ready to make a comeback after the summer.

“I decide to stop for one year to take care to my wife and my new baby,” Duhaupas said.

“After the Jarrell Miller fight (a unanimous loss in April 2018), it was not time to think about boxing. I needed a break and to consider my future.

“After speaking with my team, I decide to continue boxing. I still want to fight the biggest fighters out there.

“I have still been training every day. This is my mentality and not an obligation. Now, I will come back in September.”

“I always respect the decision of my fighter because boxing is a hard sport. At the same time, it’s such a beautiful sport.

“Johann is currently one of the great European fighters out there. He made his name in the USA when giving Deontay Wilder such a hard fight. Also, his coach is American.

“I give all my best efforts to Johann for being what he is today and I will do everything to help him any way I can.

“It’s a real pleasure to work with him as when he decides something he won’t give up until the end.

“Now it’s my part, and for his come back we have a double objective. We want a comeback fight in September and then want to make a big fight for December.

“A lot of fighters want to fight versus Johann and we have had many offers, but we will decide who the opponent will be in July,” he added.

Fury is set to begin scouting for his next opponent after taking some time out to enjoy his Las Vegas debut triumph.

‘The Gypsy King’ dominated and knocked out Tom Schwarz at the MGM Grand in what was a breakout win on American soil.

It’s been predicted Fury will look for another also-ran contender for his fight on the East Coast. Duhaupas would certainly fit the bill.