Hollywood royalty Sylvester Stallone, the man who gave the world the greatest underdog story of all time in Rocky, has thanked Tyson Fury for his Saturday night tribute.

Fury donned the full Apollo Creed ‘Uncle Sam’ gear from the famous scene in Rocky IV for his ring walk at the MGM Grand. The 30 year-old was making his Las Vegas debut when facing German Tom Schwarz.

Capturing the imagination of the United States public, Fury’s performance inside the ring paled into insignificance. The entrance completely overshadowed the victory, which came in the form of a dominant second round stoppage.

Stallone wrote and directed the original Rocky movie in 1976. The legend was obviously impressed with the lineal heavyweight champion.

“Thank you to the amazing Real life champion, Tyson Fury! It’s so incredibly gratifying to see these moments live on. “ Yo, it ain’t over til it’s over!“ sorry I meant 1985, still, it’s amazing!” – said Stallone. 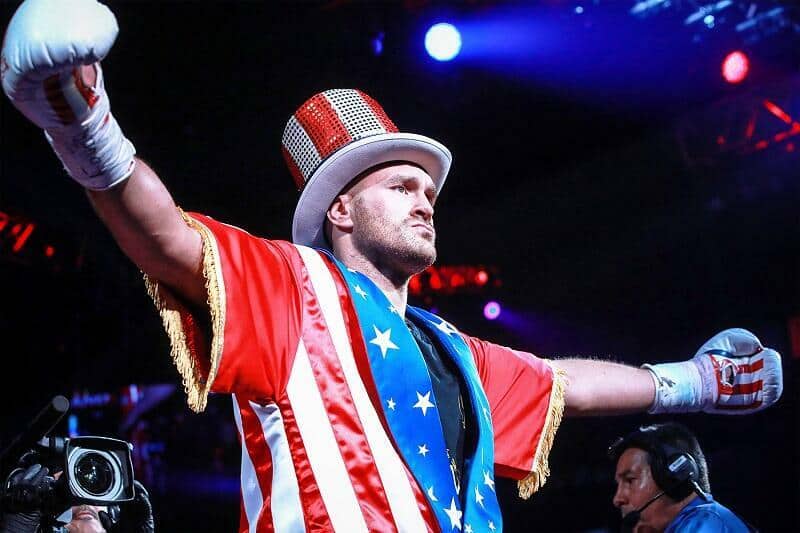 In the film, which was released as Stallone said in 1985, Creed dies at the hands of Ivan Drago in a comeback exhibition match-up. Catchphrases such as, ‘if he dies, he dies’ and ‘throw the damn towel’ have stayed in the psyche of boxing fans for four decades.

The ring walk also lived on – maybe even more so, made even more famous by the addition of music from singing legend James Brown.

‘Living in America’ was a huge hit for the ‘Godfather of Soul’. It once again went down a storm, this time for Fury.

Complete with Las Vegas showgirls, Fury wowed almost 10,000 at the Grand Garden Arena when taking his record to 28-0-1.

A fight with Deontay Wilder is currently being discussed after an initial date of February 2020 was agreed back in May.

Firstly, Fury will compete again, either on September 21 or October 5th in New York City.

The likes of Jarrell Miller, Chris Arreola and Adam Kownacki are already being touted as possible opponents.

Barclays Center is expected host, whilst Madison Square Garden is also in the running.