Mairis Briedis won through to the World Boxing Super Series Final after what was a highly farcical victory over Krzysztof Glowacki in Riga.

Winning the opener, Briedis then took a hard shot to the back of the head. The Latvian retaliated squarely in front of referee Robert Byrd with a shocking elbow to the jaw.

The blow was a solid one and could have knocked many cruiserweights to the ground.

In a delayed reaction, Glowacki did hit the floor but Byrd told the Pole to get on his feet.

Seconds later, Glowacki was dropped by Briedis right at the end of the round. With just seconds remaining, noise from the crowd drowned out the bell, which was frantically rung for around twenty seconds.

Briedis knocked Glowacki down again amidst chaotic scenes. At one point, it looked as though the fight was called off.

Glowacki was allowed to come out for the third and caught Briedis with a hard shot. But obviously still hurt, Glowacki was put down hard again and waved off.

An unbelievable turn of events which will surely see a protest from Glowacki, who lost the WBO belt he only recently gained.

The WBC and WBO failed to agree on officials for the bout, meaning the WBC was not on the line.

In a twist, Byrd’s performance will be scrutinized after wife Adalaide was named a judge for the bout.

Byrd was involved in one of the worst scoring decision in recent years at Gennadiy Golovkin v Canelo I.

‘The KO Doctor’ lived up to his name with a crunching tenth round blow, which rendered Tabiti unconscious.

With the win, the Cuban booked his place in the World Boxing Super Series final.

Tabiti began well in the early stages but soon ran out of steam under relentless pressure from Dorticos.

Taking over from the third onwards, Dorticos overcame a bad cut in the sixth to regain his composure.

A head clash opened up the gash just under the eyebrow and soon after Tabiti was deducted a point for holding.

From then on, Dorticos was cruising to victory until a devastating shot ended proceedings. 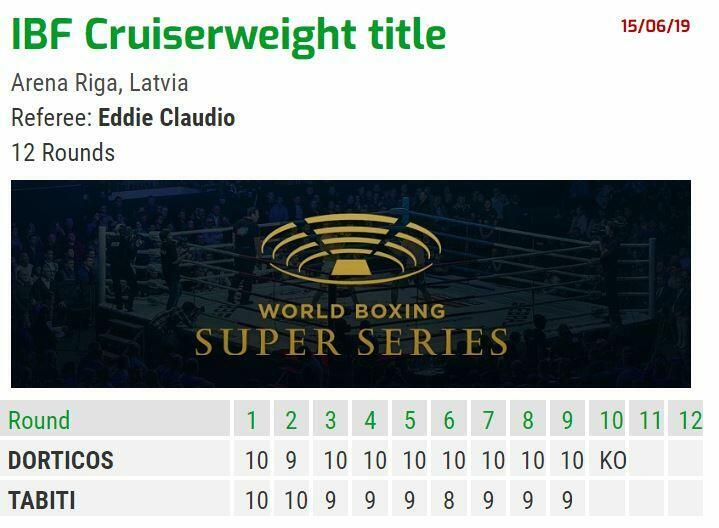 An all-out cruiserweight war between Nikolajs Grisunins and Vaclav Pejsar saw both fighters hit the canvas on separate occasions.

Pejsar was left bloodied and battered but gave as good as he got in the bout. In the end, Grisunins got the verdict after six.

In the TV opener at super middleweight, undefeated Jevgenijs Aleksejevs was given a split decision on the cards against the experienced Sergey Khomitsky.

Aleksejevs had seemingly done enough to take the win by at least a couple of points. But had to be content with the close triumph.

Upon the completion of the contest, scores read 58-57 twice to Aleksejevs and 58-57 to Khomistky.

At light heavyweight, Ricards Bolotniks dropped Gasan Gasanov with a crushing body shot, and downed him again before the fight was called off in the sixth.

18 May – The SSE Hydro, Glasgow, Scotland