World Boxing News has moved to extend the Pound for Pound Rankings in acknowledgment of the strides made in the Women’s side of the sport.

Multiple champions now hold more than one belt, with three completely cleaning out their respective divisions.

The Norwegian has held the quintet of straps for an amazing FIVE-YEAR spell.

Unbelievably, Shields also unified at super-middleweight in a spell of just two and a half years as a pro.

Next comes lightweight queen Katie Taylor, who somewhat controversially grabbed a quartet of belts at 135 pounds.

Delfine Persoon seemed to have done enough for at least a draw in their New York meeting in a fight which many fans want to see again.

Puerto Rico’s Amanda Serrano is next due to her standout feat of claiming world titles in SEVEN weight divisions, whilst Persoon comes in fifth place in recognition of her performance against Taylor.

Hammer takes sixth spot for her previous achievements at middleweight, whilst multi-weight champion Daniela Bermudez is in seventh.

Finalizing the list at ten is undefeated cross-codes puncher Heather ‘The Heat’ Hardy. The Brooklynite recently won her first world title and holds a perfect record of 22-0 as a pugilist.

Hardy scored a decision win at Madison Square Garden over Shelly Vincent in her last boxing bout back in October. 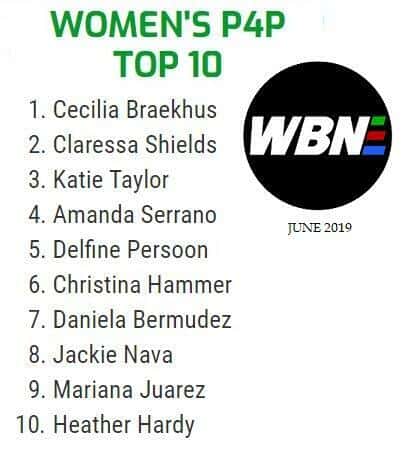