The knuckles of heavyweight Daniel Dubois – a truly FRIGHTENING sight

Bruiser Daniel Dubois took part in a speedboat photo op on Wednesday, showing off a right pair of bashers in the process.

The UK heavyweight contender posed with his fist clenched, and as Frank Warren’s Dev Sahni pointed out, Dubois has a most terrifying set of knuckles.

Sahni simply wrote: ‘The size of them’ – and he’s not wrong. Dubois will be hoping they push him to more knockouts in the future.

THE SIZE OF THEM ???? pic.twitter.com/okznL48miD 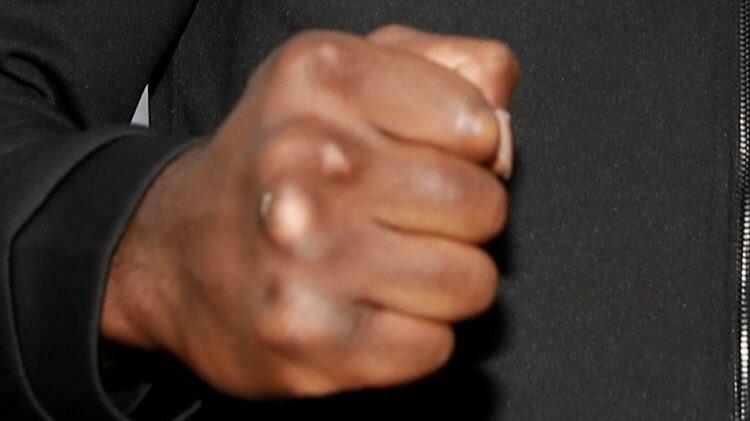 ‘DDD’ is looking forward to the biggest night of his career so far when the Londoner meets Nathan Gorman at the O2 Arena.

The big hitter is eyeing a coveted British title win as a springboard to a world title shot in 2020.

Recently, the pair spoke about their impending clash.

Dubois insisted he had absolutely no reservations over accepting a marquee domestic encounter at this early stage of his development.

“As I have always said, whoever is put in front of me I have to go through them and that is what I have done so far.”

“As I proved in my last fight, I want to bring excitement to the heavyweight division for the fans. I promise it will be another explosive night on July 13th.

“I’m very confident that I can knock anyone in the world out right now.

“I would have fought Joe Joyce and now I will fight Gorman. I’m confident in my own ability that I can deal with everyone out there. I’ve got what it takes to beat them.

“I believe I am way ahead and better than Gorman and on fight night I will prove it.

“There is no way he will stop me. I accepted this fight straight away and when Frank (promoter Warren) told me about it, it was on.”

Gorman, meanwhile, revealed his surprise that a fight that was tipped to take place at the end of the year or beyond has now become a summer showdown that he didn’t anticipate his heavyweight rival signing up for.

“I am very surprised, to be fair,” he confessed. “I was probably expecting it to be next year – in the summer time probably – and that is what I thought. When the phone call came it took me only a matter of seconds to say yes so it is nearly here now and only a couple of months away.

“I’m over the moon we’ve got the fight on. Fair play to Daniel, I didn’t think he would have accepted it, but he is obviously as keen as I am to fight. There should be plenty of excitement and a I’m sure the fans will love it.

“I can’t see it going 12 rounds and the plan is to go in there and stop him. The winner out of me and Daniel will proceed onto world honours, I’d imagine. The British title will propel you to the world stage.

“It is good for the fans to see the best prospects like me and Daniel fight each other. You can overcook a fight and I think we have now got it at the right time, I really do.

On what could be next after Gorman, Dubois concluded: “There has been a lot of talk about this fight, there will be attention but I think Nathan is gonna be my easiest fight so far.

“After I’ve got him out the way I’m after Joe Joyce and whoever is left.

“I have got what it takes to deal with him and it will be easy. Be careful what you wish for. I’m here and will get the job done.

“I don’t care about liking Nathan. We’re in the hurt business and that is what I look forward to doing to him on fight night.”