ULTIMATE BOXXER, Britain’s first boxing entertainment brand, returns for a night packed with excitement, adrenaline and unmissable raw action when it presents its heaviest weight division yet: The Cruiserweights on Friday 19th July in Manchester, at the Altrincham ICE Arena

UBIV, sponsored by MansionBet, will be televised exclusively live on BT Sport 1 and the dedicated boxing channel BoxNation as well as for free on BT’s Sport’s Youtube. .

Following the thrilling middleweight event in London, UBIV powers into the red-hot Cruiserweight division for potentially its most explosive tournament yet.

The cruiserweight division has become a firm fan-favourite in recent years, mixing heavyweight power with light-heavyweight speed and delivering some of the most explosive and entertaining action-packed fights.

ULTIMATE BOXXER features eight highly ranked fighters from around the UK who will battle their way through the tournament starting in four quarter finals of 3 x 3 minute rounds; two semi-finals and one final in one to determine the winner who will win the large share of the prize money; a promotional deal and be catapulted up the domestic ratings.

The action in the ring is combined with live music, star-studded talent and entertainment for a next generation spectacle.

The eight cruiserweight contenders ready to fight it out in UBIV are:

2. Tony “The Conqueror” Conquest, Romford, Essex, 18-3-0, 6 KO’s
The most experienced of the UB contenders, Conquest is a former Commonwealth, WBO International and Southern Area Cruiserweight Champion in a 21-fight and ten year career. He’ll be throwing everything he’s got into his final shot at the big-time.

3. Mikael “The Beast” Lawal, Shepherds Bush, London, 9-0-0, 6 KO’s
The undefeated Londoner packs dynamite in his fists with six of his nine opponents going early and four of them have come inside three rounds! His explosive style could take advantage of the three fights, 3 x 3 minute round, UB format. Well travelled with fights in Germany, Saudi Arabia and Riga, Lawal is the dangerman in UB. 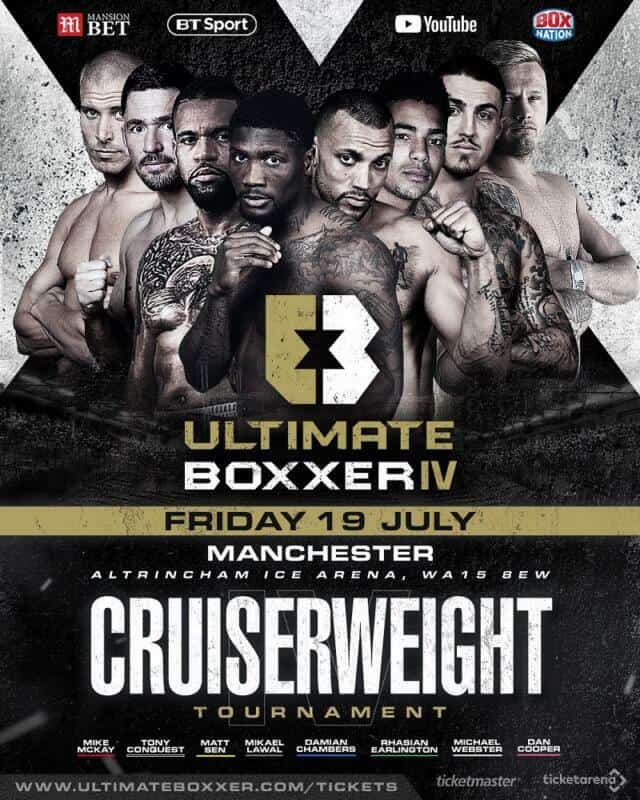 4. Damian “Chambo” Chambers, Dukinfield, Lancashire, 7-0-0, 4 KO’s
Another sledge-hammer hitter, Chambers is out to do damage from the first bell with all four of his knockouts coming inside the first round. Nothing fancy with Cambers, he just comes forward and throws bombs. One things for sure he bring knockouts and excitement.

5. Michael “Webba” Webster, Middlesborough, 1-0-0
The least experienced in the line up but could spring the biggest surprise with his unknown quantity. He’s the biggest competitor coming in at 6ft 6in. Making his pro-debut in March with a victory, Webster will be going all out to make his name as UBIV winner.

6. Matt “Slugger” Sen, Wolverhampton, 6-1-0, 1 KO
Strong and powerful, Sen, a former bodybuilder aims to use his freakish strength to out-muscle his rivals and charge him to victory. With six fights under his belt, Sen will be a real handful for the field.

7. Rhasian Earlington, Newcastle-under-Lyme, England, 5-0-0, 1 KO
Undefeated in five fights, Rhasian is a fast rising prospect who has been marked out as a special talent. His coaches are so enamoured with his fast hands and feet and hard-punching that they have given the 21-year-old the nickname “Siany Baby Ali” after The Greatest Muhammad Ali. Ultimate Boxxer is the stage where Rhasian can really shine.

8. Mike “Magic” McKay, Llandyrnog, Wales, 3-0-0
Fire-fisted Welshman McKay is the joint tallest at 6ft 4in and the former England Karate International fighter is looking to blast his way to the top of Ultimate Boxxer. He aims to emulate Wales’ former World Cruiserweight Champion Enzo Maccarinelli.

Ben Shalom, founder of ULTIMATE BOXXER, said, “Carl Greaves [Ultimate Boxxer matchmaker] has put together a brilliant card which is going to guarantee fireworks…definitely the most exciting card to date. The cruiserweight division needs this right now with a huge amount of talent all over the country. We’re looking forward to a special night in Manchester.’

TICKETS ARE ON SALE NOW. GO TO www.ultimateboxxer.com/tickets