The (debated) pound-for-pound king, Terence Crawford, will not need to relinquish his throne. Crawford (35-0, 26 KOs) scored an unusual sixth-round TKO over Amir “King” Khan in front of 14,091 fans at Madison Square Garden to defend his WBO welterweight title for the second time.

‘Bud’ landed an accidental low blow and was ruled the victor after Khan said he was unable to continue.

On the inaugural Top Rank on ESPN Pay-Per-View broadcast, Crawford proved, once again, to be without peer. Now that Khan is out of the way, Crawford is set to prove himself against the world’s best.

“The fight I want next is Errol Spence,” Crawford said. “Whenever he is ready he can come and get it.”

Said Top Rank chairman Bob Arum: “We want to fight Errol Spence. Everyone wants the fight. There is one guy stopping it, and that is Al Haymon.

“I think fans should stop watching PBC fights until Haymon agrees for Spence to fight Crawford.

“We all know there’s only one winner in that fight and that’s Terence Crawford.” 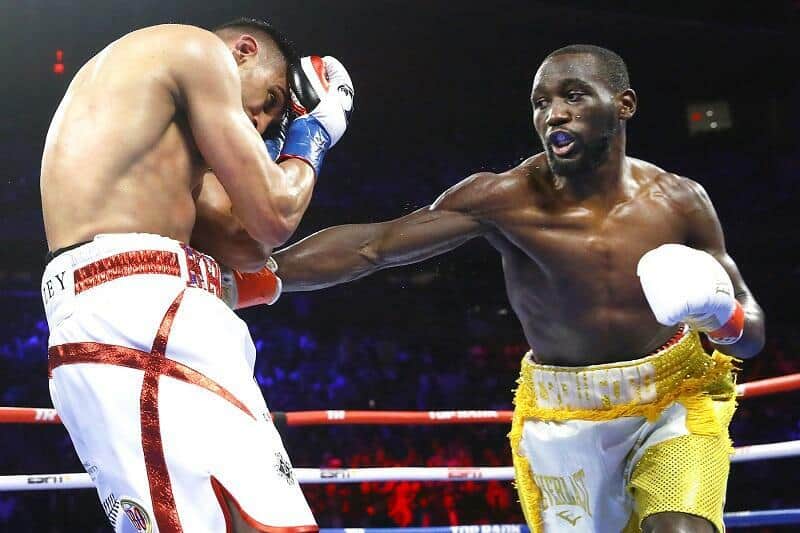 Crawford nearly knocked out Khan (33-5, 20 KOs) out in the opening round, knocking him down with a crisp overhand right that was followed by a left hook.

Khan regained his composure but was never in the fight, as Crawford switched from orthodox to southpaw.

Then, the low blow happened, and it was over.

“I now know why Terence is one of the best pound-for-pound fighters in the world,” Khan said.

“I was just warming into it and then he hit with a low blow.”

“I’d rather get knocked out cold than quit. Good night. Thank you, New York.”