Results from the o2 Arena in London as David Allen faces Lucas Browne in a heavyweight contest. In the co-feature, Derek Chisora battles Senad Gashi.

Josh Kelly showed he was levels above Przemyslaw Runowski to defend his WBA International title.

Capable of ending the fight whenever he wished, Kelly allowed Runowski to catch his breath throughout the fight and admire his work.

The first knockdown occurred in the 2nd from a Kelly left hook and Runowski took more damage as he got up until Kelly eased off.

Runowski was landing some clear shots and luckily for Kelly they didn’t trouble the Pretty Boy too much.

After being cut in the 6th round, Kelly hit with a sense of urgency.

Being instructed by his corner, PBK entered the 7th calm and relaxed and was stretching the fight out.

Kelly came out in the 9th with an aggressive attack which forced Runowski to touch the canvas. Kelly tried to finish the job but his shots weren’t accurate enough.

Two short left hooks dropped Runowski in the 10th, Kelly kept the pressure on but the fight saw the final bell and won via points with scores of 100-88 x2 and 100-89.

Joe Cordina picked up the British title to add to his Commonwealth with an impressive sixth round stoppage over Andy Townend.

Cordina opened the first few rounds with a solid jab which made Townend appear uncomfortable.

Townend guarded well and struck back with a one-two combo, but Cordina was able to break through with flash combinations.

Throughout the fight, Townend appeared tailor-made for the Olympic pedigree of Cordina. The counter right hand working a treat.

Starting an assault in the sixth with an uppercut, Cordina went in throwing left hooks to drop Townend three times ending the fight at 2:51.

Benn showed minor improvements to his armory. Also a sense of defence and a plan to land an over the top right hand.

Benn landed a couple of power counter right hands in the fourth which staggered Zahradnik. Not following it up, Benn continued to box, dip and throw shots at angles.

In the sixth, Benn again failed to follow up a big right hand which Zahradnik had time to shrug off.

Later in the round, Benn capitalised on an attack forcing Zahradnik to the ropes.

Benn launched a right to the body in the seventh which forced Zahradnik to drop to the canvas. He returned to his feet and survived to the final bell. 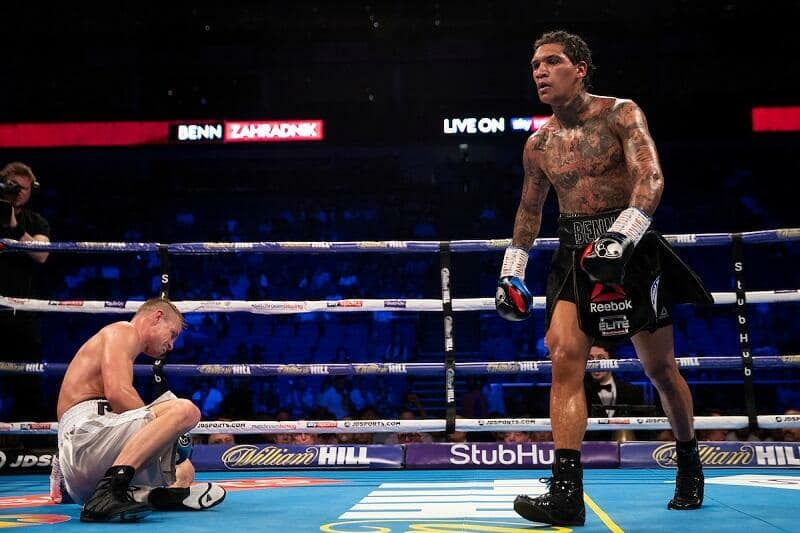 Nikita Ababiy enjoyed his UK debut flossing to celebrate his 2nd round KO win, improving to 4-0 (4KOs) in the process.

A barrage of shots which started with a brutal right hook allowed Ababiy to follow through and send Faltin to the canvas, ending the fight at 0:26.

The Baby Faced Assassin Shannon Courtenay moved to 2-0 winning 40-36 on the cards.

Silyanova tried to fire back in the third but unsuccessfully landing, Courtenay later in the round answered with a barrage of shots.

A clumsy last round saw Courtenay lunge towards her fleeing opponent until the final bell. 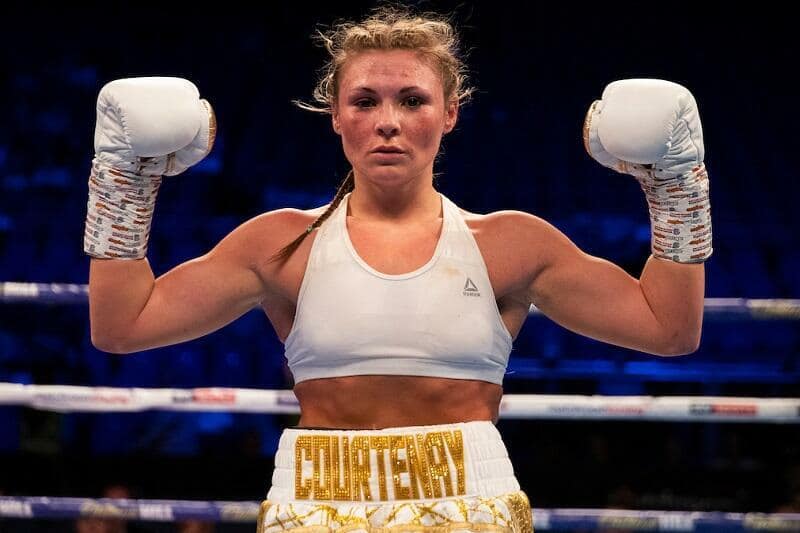 John Harding Jr. cruised to 7-0 with a 60-54 points victory over Miroslav Juna.

Harding Jr. landed a sharp right hand in the 2nd, Juna found himself covering up.

Harding Jr. followed up in the 3rd using his reach and size to his advantage, producing a repetitive over the top right hand which continued into the 4th.

Juna was tired in the last round enticing Harding Jr. to increase his work rate. The consistent shots saw the Brixton man win comfortably upon the final bell ringing.

Sam Cox followed up the opener with a 40-37 points victory over Georgi Georgiev.

Cox started by stalking Georgiev, swinging recklessly at times and being caught in the process which threw him off balance.

Cox started to improve with an increased work rate.

A straight right from Georgiev jolted the head of Cox back in the final round but Cox recovered and fought on to the final bell.

Sam Hyde opened the show with a sickening 1st round knockout over Josef Jurko.

Landing a lovely right hand to start the finish, Hyde opened up with hard shots to the head and body to send Jurko crumbling to the canvas.