Ultimate Boxxer IV confirmed at cruiserweight on June 28 in Manchester

ULTIMATE BOXXER, Britain’s first boxing entertainment brand, announces that the Cruiserweight division will be the showcase for ULTIMATE BOXXER IV on Friday 28th June in Manchester (venue to be announced).

UBIV, sponsored by MansionBet, will be televised exclusively live on BT Sport, BT Sports’ YouTube channel – available to anyone to watch for free – and the dedicated boxing channel BoxNation.

ULTIMATE BOXXER is the exhilarating elimination tournament featuring eight talented fighters from around the UK who battle it out starting in four quarter-finals of 3 x 3 minute rounds; followed by two semi-finals and one final to determine the winner who will win the large share of the prize money; a promotional deal and be catapulted up the domestic rankings.

Knockouts in the ring are combined with live music and entertainment designed to engage and attract the next generation of sports fans on a more regular basis.

Following UBI: Welterweights, UBII: Light-Heavyweights and UBIII: Middleweights – set for Friday 10th May at The Indigo at The O2 – the fourth instalment of the exciting tournament focuses on the red-hot 200 pound division that has become a firm fan-favourite in recent years for delivering some of the most explosive and entertaining action-packed fights.

Some of the biggest names in British boxing have made their name in the division such as British World Champions Tony Bellew; David Haye, the first British fighter ever to unify the division, Enzo Maccarinelli; Johnny Nelson, the longest reigning divisional World champion with the most title defences, Carl Thompson and Glenn McCrory, Britain’s first ever World cruiserweight champion. 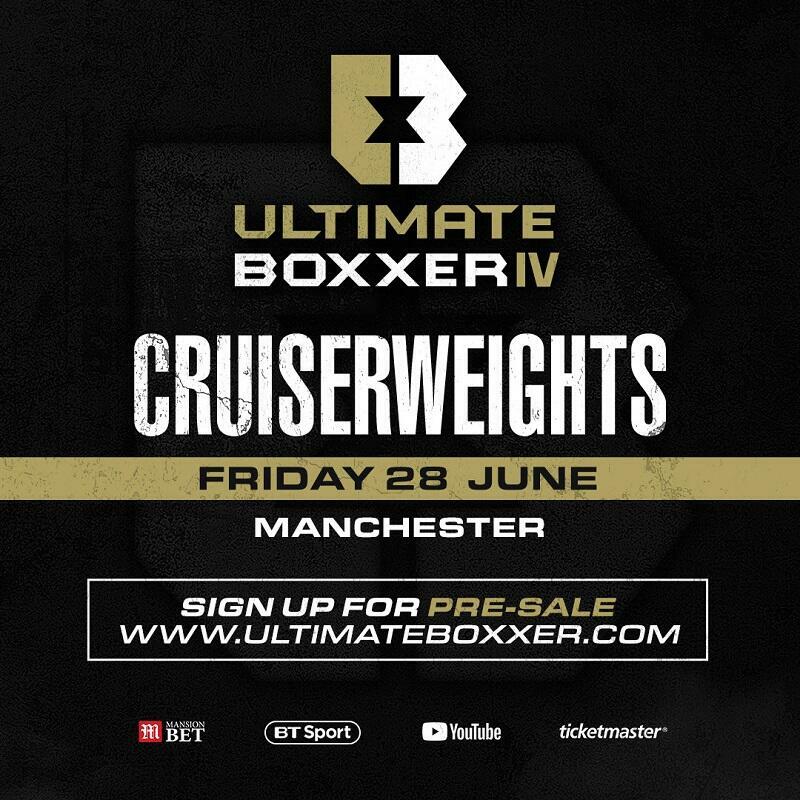 ULTIMATE BOXXER founder Ben Shalom said, “This is the heaviest weight category we have staged so far and looking at the potential line-up, I believe we could be in for one of the most dramatic nights out of all the series. These guys are big men with the power of heavyweights, mixed with the speed of light-heavyweights and so anything can happen when they start unloading their punches over a short fight.’’

Sign up now at www.ultimateboxxer.com to gain early access to discounted tickets 48 hours in advance of general sale. Tickets will go on pre-sale on Wednesday 24th April and on general sale on Friday 26th April.  Further tickets details to follow.