Further information has been released regarding the forthcoming purse by for Sergey Kovalev v Anthony Yarde.

The mandatory WBO light-heavyweight title bout will be open to purse bids this Monday to see where the fight will end up.

Sceptics who say it’s too early for Yarde to face Kovalev are expecting a late withdrawal by the Brit.

Saying that, there’s been no indication from promoter Frank Warren that they won’t participate in the process.

If agreed, Kovalev will put his belt on the line against Yarde later this year.

Below is the latest correspondence sent out to Warren, Also to Kovalev’s promoter Kathy Duva. 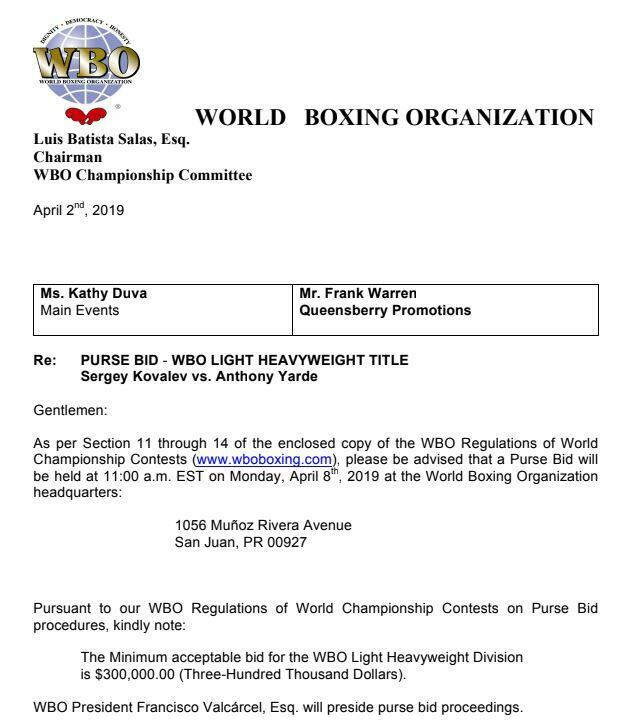 As per Section 11 through 14 of the enclosed copy of the WBO Regulations of World Championship Contests (www.wboboxing.com), please be advised that a Purse Bid will be held at 11:00 a.m. EST on Monday, April 8th, 2019.

This will take place at the World Boxing Organization headquarters:

1. If the Champion is injured. Depending on the type of injury and the needed recovery time, the WBO Championship Committee, in accordance to the WBO Regulations, will decide if the title is vacated or an interim championship is ordered.

2. If the Challenger is injured or refuses to fight, he loses his position in the rankings and the WBO World Championship Committee can determine the next available contender. Or it can order an Elimination bout with the two best available contenders, and the Champion can be permitted a Voluntary bout.

3. Signed contracts shall be filed to the WBO Offices within five (5) days. Upon the adjudication of the Purse Bid.

Section 13 (a) subsections (1) (A) and (B) of the WBO Regulations of World Championship Contests provides:

A. The Purse for Championship Contests held and completed pursuant to Purse Bids shall be distributed as follows:

(1) CHAMPIONSHIPS WITH AN EXISTING CHAMPION

(b) For a fight for the Title held in any other country. The Champion shall receive 80% of the purse. The Challenger shall receive the remaining 20%.

Please be advised that the parties must comply fully with the WBO Regulations of World Championship Contests regarding Purse Bid procedures.