Advertisements
Home » What does the future hold for Dave Allen?

What does the future hold for Dave Allen?

The future looks very bright for the White Rhino. Providing he wins his next fight against Australia’s Lucas Browne that is.

Dave Allen’s dreams as a boxer are finally coming true after a lot of hard work since a bad cut nearly saw his career come to a premature end against Lenroy Thomas back in March 2018. He’s picked up some decent wins in the last year, he’s earnt enough money to buy a new house, and he’s now headlining a huge event at the O2 in April.

Will He Beat Lucas Browne?

The bookmakers think so. The boxing world thinks so too if he’s on top of his game. Dave Allen has been priced as an overwhelming favourite at 4/7 to topple the Aussie. Lucas Browne is the clear underdog at 2/1. His price has drifted somewhat due to his poor showing in his last fight against Kamil Sokolowski. He won on points at the start of March against the Pole. Just.

If you’re a betting man, or woman, consider adding Allen to your acca on a night of some great boxing at the O2, which includes Dereck Chisora vs Senad Gashi. Josh Kelly, Conor Benn and Joe Cordina will also fight on the card on April 20th so it might be worth adding all the favourites to your betting slip.

Don’t just take the first set of odds you see, though. There are plenty of offers about.

The expected result, and one which will send the Conisbrough heavyweight to new heights. He’s admitted that he’s at the stage of his career where he needs to be 100% serious about Boxing. He’s shown that in the build-up to this fit with early morning runs, good food, dedicated sessions with Darren Barker at his 12×3 gym in London, and a conscious effort to just be the man everyone loves. Healthy and funny David Allen. His recent meeting with WWE legend Mick Foley proved that. If you’re not following him on social media and want to smile and giggle every day, make sure you check out his Instagram profile, you won’t be disappointed. 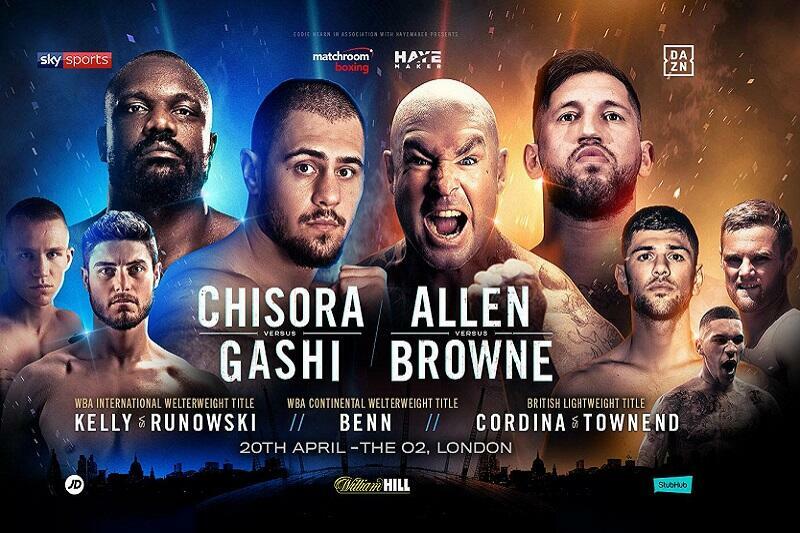 If that happens, it’s difficult to see what happens next. He’s been training religiously for the first time in his whole career. But he’s eating well and he’s sleeping well. He’s in the best shape of his life. It wouldn’t be a surprise to see Dave Allen give it all up if he fails to come through this test. After all, he saw how poor Browne was against Sokolowski. It should be a walk in the park in all honesty if he’s on top form. Nick Webb couldn’t get up from Allen’s overhand right. Lucas Browne won’t either if it lands.

Dave Allen has so much potential if he’s got his head screwed on properly, but if he loses to Browne in April, that could be it.

Anyone who’s a fan of Dave Allen would have seen this phrase as his Twitter name for a long time. Oh, how he’d love to headline a Box Office event. If he can rack up a few more wins, it could happen. Allen has so many fans across the country, and there’s no denying that he could sell out the O2 Arena if he fought a top opponent in the future.

A fight with Chisora next? A rematch with Dillian Whyte? Whatever the future holds for Doncaster’s finest, it’s been a hell of a rollercoaster up to this point. Those that have been with him every step of the way will want to stay on it. Nobody wants to get off. Dave Allen to hold a belt in 2020? Everyone would love that.