Billy Joe Saunders is looking to fight for the full world title in 2019 after confirming his interim shot against Shefat Isufi on May 18.

The former middleweight ruler has moved up. He was originally slated for a crack at Gilberto Ramirez’s vacant title.

‘Zurdo’ decided against relinquishing his belt, leaving the Briton to settle for the lesser strap for his clash with Isufi at Stevenage FC.

Once he gets Isufi out of the way, Saunders wants to go straight into a fight with Ramirez should he stay at 168. If the Mexican moves up and Saunders becomes full champion by default, an all-UK collision with WBA ‘Super’ title holder Callum Smith would then enter Saunders’ mind.

“I believe I am the best middleweight and super-middleweight in the world – bar none. I want to get noticed at 168lb,” said Saunders.

“I’d definitely fancy a fight against Callum Smith. I’ve mentioned it to Frank before that it would be a good fight to make.

“He is a great fighter. The type I want to test myself against. It would be hard to say, ‘No’ to that fight.

“I shall fight this No.1 ranked opponent. I’ll be taking his spot. Then I will fight Ramirez after. Let’s get that fight going on.

“If he moves up I would become world champion. But I don’t want to win it that way because I want to beat the champion.

“It is all good vibes from me, I am willing to fight anybody in the super middleweight or middleweight category. I’ll put on a masterful display.”

Saunders even confirmed a drop down to middleweight could still be achievable for the right offer.

“I am open to boxing at super-middleweight and middleweight. I’ve not got miles on the clock, in my 27 fights I have taken ten hard punches and I am just coming into my prime.” 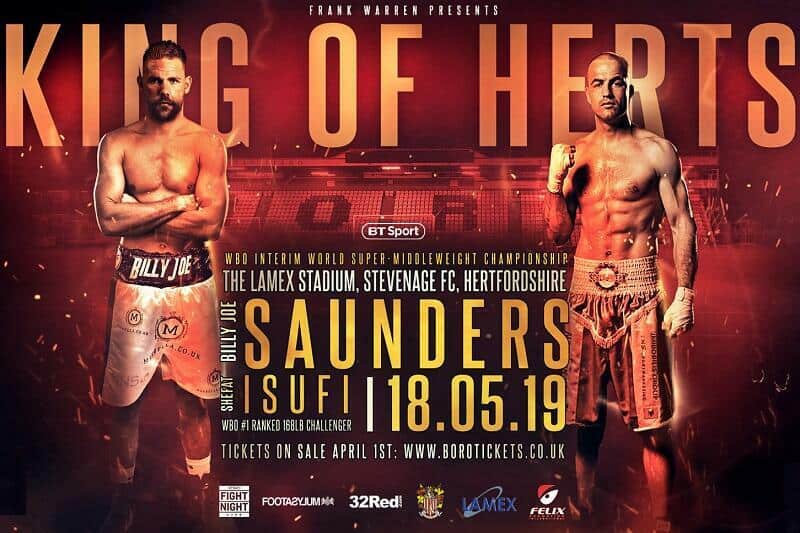 Promoter Frank Warren believes, either way, Saunders will be holding the super-middleweight aloft as a two-weight ruler soon enough.

“If he is successful against Isufi – and we are not underestimating the threat he poses, Bill will either become world champion or fight Ramirez for the title should he stick around at super middleweight,” said Warren.