Promoter Frank Warren has revealed the reasoning behind a decision to delay Tyson Fury’s rematch with Deontay Wilder.

Speaking to Paul Dempsey on BT Sport at the Royal Albert Hall on Saturday night, Warren detailed the thinking behind ESPN pulling Fury out of the return.

ESPN offered Fury big bucks to fight a warm-up clash in the coming months, in the hope that Fury will get a fairer shake in a second outing.

Fury lost out via a debated draw, despite seemingly winning the fight 115-111 or 114-112 with a wafer-thin round tough to score.

A 50-50 deal was offered to Fury for Wilder on May 18. The stipulation was Showtime would broadcast once again.

But due to the scoring, Warren says Fury wants to avoid another repeat of the scorecards. He believes ESPN can offer that by staging the event.

“It’s not like Tyson doesn’t step up to the plate. He went to the States, he went to Germany to fight Klitschko so he deserves this,” Warren explained to Dempsey. 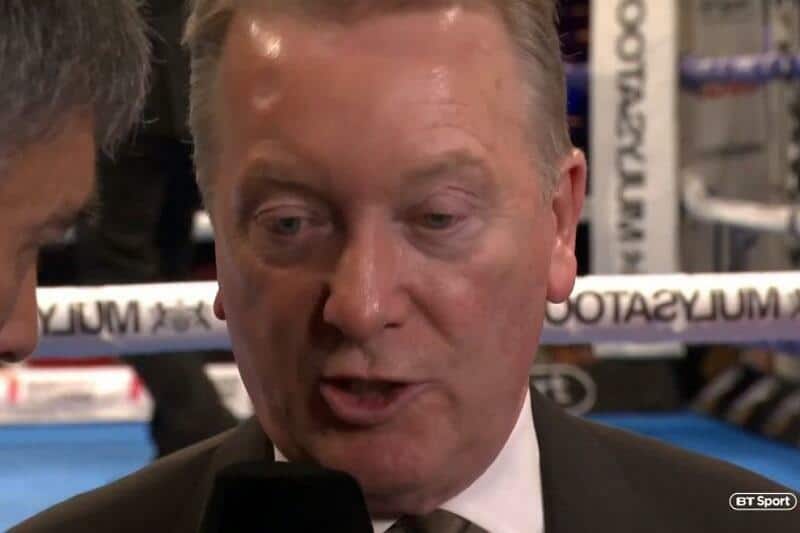 On whether Wilder will be available, Warren added: “They’ll go where the money is. That’s the objective here.

“I just wish that last show in the States was my promotion. It was another guy’s promotion. A PBC (Premier Boxing Champions with Al Haymon) promotion and that’s their fighter.

“I’m not saying the judges were crooked, although one judge was totally incompetent. But Tyson won that fight. And Maybe if it was on another promotion it would have gone the other way, who knows?

“We want everything in our favor. This deal was done, so as far as Tyson is concerned, everything is in his favor.”

Wilder has been vocal in condemning the actions of Fury and ESPN. The WBC champion is currently considering his options moving forward.

One of those is to sign with DAZN. This would be bad news for Fury and see ‘The Bronze Bomber’ push towards an undisputed unification with Anthony Joshua.

A huge deal is said to be on the table from the streaming service, who recently drafted in Gennady Golovkin on a mega-money six-fight contract.