Five Time World Champion Vinny Paz has confirmed that he will appear, have a booth and hold a Meet & Greet with his fans at the Las Vegas Convention Center for the 5th Annual Box Fan Expo on Saturday May 4, 2019 from 10a.m to 5pm, during Cinco De Mayo weekend.

The Boxing Expo will also coincide with the highly anticipated fight between Canelo Alvarez vs Danny Jacobs, that will take place later that evening at the T-Mobile Arena.

Paz will make his 2nd appearance at this years’ Expo, and will be signing gloves, photos, personal items and memorabilia. Paz will also have merchandise to sell for fans to enjoy. Boxing Fans will also have an opportunity to take pictures with this boxing legend also known as “Pazman”. 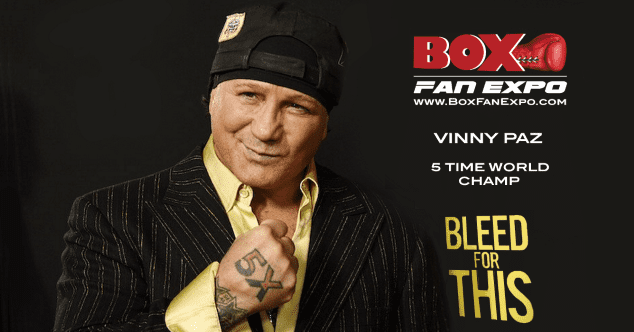 Paz had his name legally changed in 2001 but fought in the 1990s as Vinny Pazienza. “The Pazmanian Devil”. In 1991, he defeated the WBA world junior middleweight champion Gilbert Delé with a 12th-round TKO in Providence, becoming the second fighter in boxing history to win both the lightweight and junior middleweight world championships.

Pazienza was forced to relinquish the title due to a serious car accident in which his neck was broken. Doctors informed him he might never walk again and would certainly never fight again.

Paz tenacity and determination proved them wrong and made a miracle comeback just 13 months after the accident, by defeating future WBC world junior middleweight champion Luis Santana by a 10-round decision.

His incredible life story about his resilience to overcome adversity was inspired and played out in the 2016 released Movie “Bleed for This”. Paz retired in 2004 with a remarkable record of 50-10, with 30 wins by knockout.

Some of his most notable fights came against Roberto Duran, Roy Jones, Jr., Roger Mayweather and Hector “Macho” Camacho.