The six-fight global partnership between GGG Promotions and DAZN will see Golovkin fight twice a year on the platform for the next three years.

Unlike many of his recent bouts, Golovkin will no longer appear on pay-per-view. Instead, his fights will be available to all DAZN subscribers at no extra charge.

In addition, GGG Promotions will present two cards per year on DAZN beginning in 2020.

Golovkin plans to return to the ring in June against an opponent to be named at a later date.

“DAZN has quickly become the new home of boxing. Making the biggest events easily available to the fans,” said Golovkin.

“When deciding on where I wanted to continue my career, DAZN’s global vision perfectly matched my goals. Not just for my career but the opportunity to showcase talented Eastern European fighters to the world.

“Thank you to my fans for all of the loyal support and I look forward to you joining me on DAZN.” 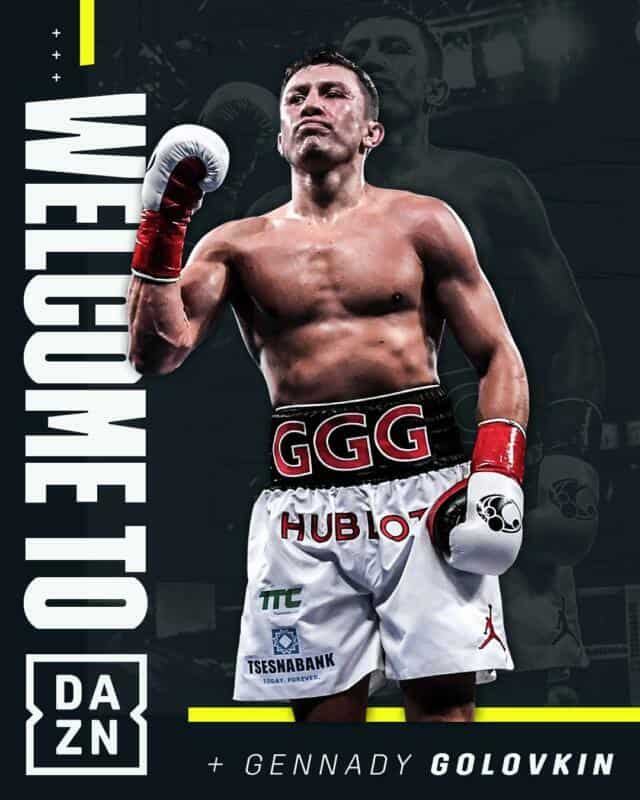 “We’re confident he will bring his passionate fans to the platform. We plan to produce tentpole events with his team over the next several years.”

The announcement sets up DAZN to stream blockbuster fights within the middleweight division for the foreseeable future. All of the division’s champions and many top contenders regularly appearing on the platform.

As part of the deal, Golovkin joins the growing family of DAZN ambassadors including Cristiano Ronaldo, Neymar, among others.

Golovkin’s fights will be available in all DAZN markets, in addition to his native home of Kazakhstan. Since launching in 2016, DAZN has rapidly expanded to nine countries. Including Austria, Brazil, Canada, Germany, Italy, Japan, Spain, Switzerland and the U.S. – across four continents, with the intention to reach 20 markets by 2020.

DAZN will share details shortly regarding a Los Angeles-based press event next week. Golovkin and Skipper will discuss the partnership.