Deontay Wilder decided to shed some light on Tyson Fury’s ESPN deal as the American nears the completion of his next fight.

‘The Bronze Bomber’ had wanted to face Fury in a rematch of their exciting December clash. A deal was almost done until Fury pulled out to sign a deal with ESPN.

Statements regarding the five-fight contract with Top Rank and Bob Arum in the USA have been exaggerated, according to Wilder.

The WBC ruler posted a video of Arum stating the deal, said to be worth $100 million (£80m), was solely dependent on the pair staging a return.

As Wilder feels messed around, the 33 year-old has since threatened to walk away for good.

“Yea, The rumors are true @Tyson_Fury I knocked you into a concussion,” said Wilder. “Let me update your brain. I got receipts and it says your a lying rat #OnMoses.

“We’ll see who needs who. I’m telling you it’s going to hurt but you’ll get over it meanwhile let me drop this receipt #ExcuseMe

“Stop being a CloutChasingHoe @Tyson_Fury your boss said that’s not close to being accurate (the $100m). In fact, that deal was made off the hopes of a rematch with me!.

“If I don’t bless you again your f***d, you big boring no power #Dosser. I’m the Champ but hey don’t take my word just wait,” he added. 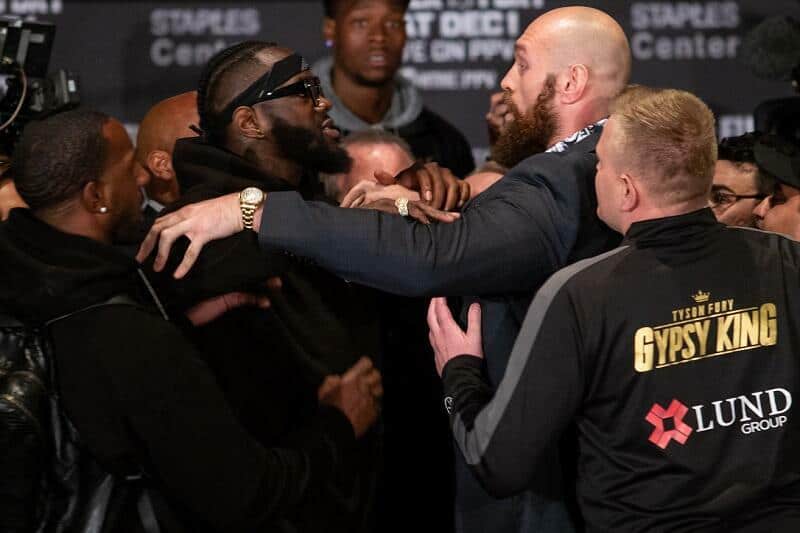 It’s not the first time Wilder has been left a frustrated figure following negotiations failing with Anthony Joshua last year.

Wilder is now left to pick up the pieces. His only other option is to take care of a World Boxing Council obligation to face Dominic Breazeale.

The pair have history and don’t like each other in the slightest, which makes for an interesting fight.

Breazeale had previously challenged Joshua unsuccessfully and would give Wilder the opportunity to better the Brit’s seventh round stoppage.

May 18 in New York is being slated for the contest. Showtime Pay-Per-View are expected to pick up the TV rights despite offers to Wilder from ESPN and DAZN this year alone.