Canelo, Danny Jacobs finish press obligations ahead of May 4 unification

The 12-round unification fight will take place at T-Mobile Arena in Las Vegas Saturday May 4. Canelo v Jacobs will be streamed live exclusively on DAZN.

Below is what the participants had to say at the event as they rounded off public appearances before solid training begins.

“I know Jacobs is a tough opponent and it’s going to be work. But I’ve always believed to be the best you must beat the best. I love challenges.

“I want people to experience a good fight when they come watch my fights. Maybe I lose, but my heart is a winning heart.

“I want to give the fans a spectacular finish and I’m going to put up a good fight.”

“You know I have the will and desire to go inside to go in that ring and be victorious. I see myself with my hand raised by the end of night.

“I know the odds are stacked against me and Canelo’s resume speaks for itself. But he’s never faced a tall, fast and big guy all at once. That’s what I’m going to give him.

“We’re going to give you what you’re looking for and the fans going to get a great fight come May 4.” 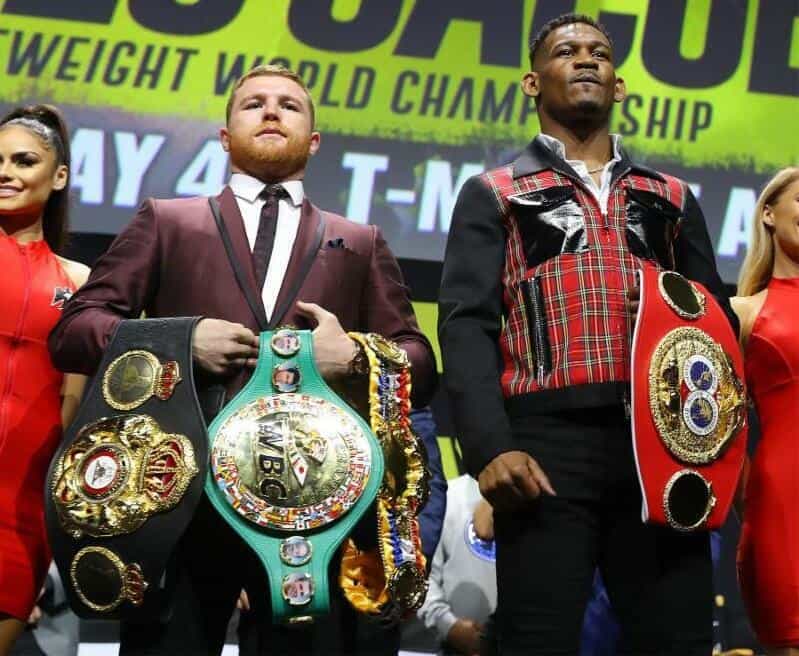 “Our objective this year is win all the belts. To become the first Mexican to win the all the world championships.”

“The moment he set foot in the gym we knew he was something special. The day he debuted he was great. But the day he retires the world will know how great of a fighter he is.”

“Jacobs is the best middleweight walking on this planet. His capabilities, skillset and gentleman ship will be what wins the fight on May 4.”

“I guarantee this is going to be the fight of the year. You have two fighters who don’t have a quit in their game. This is a fight for the ages. The fact that Jacobs and Canelo both want to be great.

“There’s no other way than to make this one great for the fans, they will get their money’s worth come May 4.”

“We believe Jacobs will unify all of those belts. He’ll take on Canelo and win that fight.”

“We’re deeply honored and proud to be exclusively showing this champion versus champion fight in the U.S.”

“We are tremendously excited to bring the Canelo versus Jacobs fight to Las Vegas; it’s going to be a great event.”

Canelo vs. Jacobs is a 12-round fight for the WBC, WBA, Lineal, Ring Magazine and IBF Middleweight World Titles presented by Golden Boy Promotions in association with Matchroom Boxing. The event is sponsored by Tecate, “THE OFFICIAL BEER OF BOXING” and Hennessy “Never Stop. Never Settle.” The event will take place Saturday, May 4, 2019 at T-Mobile Arena in Las Vegas. Streamed live exclusively on DAZN.