In the video, Okolie is seen landing several solid blows on WBC number one heavyweight Whyte. Even rocking the Londoner back on the ropes.

“Here’s a quick 20 secs or me slapping @dillianwhyte about. And anyone else I don’t give a toss about anyone in this industry,” said Okolie in the fiery post.

Bad blood between the pair has intensified in recent weeks. Okolie is eyeing a piece of the top division pie in the very near future.

At present, the tough 26 year-old holds the British and Commonwealth versions of the domestic crown along with a place in the WBA rankings as Continental champion. 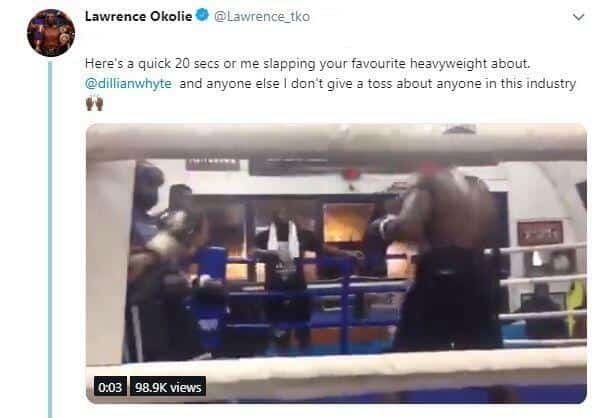 Okolie will defend those straps against Wadi Camacho later this month. He’s then likely to focus on European level and eventually a world title at 200 pounds.

It’s thought Okolie could be in the heavyweight mix by the end of 2020. Whyte will be a firm target on the way to potentially becoming a two-weight world title holder – should Okolie’s career plans come to fruition.

A former sparring partner of Anthony Joshua, Okolie has reportedly dropped the current heavyweight ruler in a past training session.

Holding an 11-0 record with eight stoppages, the Hackney man looks set for a huge eighteen months before setting up a grudge match with Whyte at some point in the future.

Whyte is currently awaiting a World Boxing Council ruling on his position at the top of the ratings. ‘The Bodysnatcher’ was due to meet Dominic Breazeale for the interim title. That was until Tyson Fury backed out of a rematch with Deontay Wilder in order to sign with ESPN and Top Rank.

Breazeale is now favorite to face Wilder on May 18 in New York. This leaves Whyte to contemplate facing Luis Ortiz for the back-up belt or possibly the next in line Adam Kownacki.

All in all, tensions between Okolie and Whyte should make things interesting moving forward as the pair bid for respective titles in separate weight divisions.