Australian / Samoan Cruiserweight Jai Opetaia (16-0) is set to step up for the toughest test in his 16-fight career to date as he prepares to do battle against Bilal Laggoune (24-1-2).

Opetaia is the mandatory challenger for Laggounes IBF Intercontinental title. This is the 3rd attempt to get the fight on after both boxers suffered injuries resulting in the fight being rescheduled twice.

Promoter Alain Vanackre stated that this fight has been a long time in the making, and as a result both boxers have had plenty of time to do their homework and develop tactics to counter each other’s styles.

We know Jai is a strong young boxer with an excellent amateur background, however we feel he doesn’t have the experience to match Bilal.

I expect it to be a tough battle but am confident Bilal has the skills to counter anything Jai brings to the ring, and I have a feeling that Bilal will stop him in the later rounds.

Jai Opetaia is on record saying he knows exactly what he is up against and is confident it won’t be left to the judges to decide on a winner.

He laughed and said ‘I am not one for trash talking and I will let my fists do the talking on March 22nd”.

I respect my opponent and there is no doubting he is a world class cruiser, though come March 23rd he will think that he has just done rounds with Mike Tyson in a phone box.

I am coming to Belgium to win and will be leaving with the IBF Intercontinental belt around my waist. 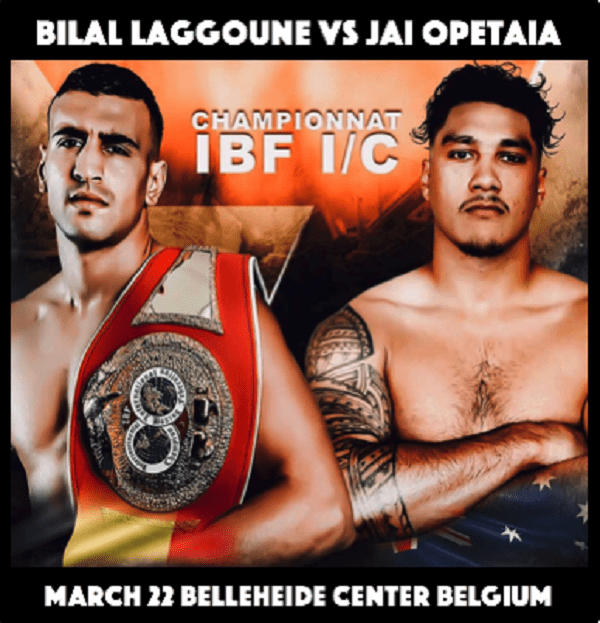 Opetaia is ranked WBO 8 & IBF 13 while Laggoune is ranked IBF # 7. Opetaia was the youngest boxer in Australian boxing history to be selected for the Olympics (London) at just 16 years old.

He earned his selection by winning the Light Heavyweight title at the 2011 Junior World Championships.

He turned professional in 2015 and gone onto win the NSW State & Australian titles while securing regional titles including the OPBF / IBF Pan Pacific & WBO Asia Pacific.

In 2017, he secured the IBF World Youth Cruiserweight title in devastating style knocking out undefeated AmericanFrankie Lopez in the first round.

Opetaia’s manager Michael Francis of Etreme Sports Management said that no stone has beenleft unturned in preparation for this one.

‘Jai hasn’t for one second underestimated Laggoune and knows he has a tough test ahead of him later this month’.

We sent him into camp in Samoa to get him away from distraction and get his conditioning right – he has had plenty of solid rounds of sparring – so mentally and physically he is ready for March 22.