The 12-round unification fight will take place at T-Mobile Arena in Las Vegas Saturday May 4 and will be streamed live exclusively on DAZN.

Below is what today’s participants had to say at the event:

“It’s important to fight in May and September on the dates where Mexican fighters have represented the country. I accept the responsibility of participating in big fights like these. It’s an honor to represent my country the way others have.”

“All fighters look for the knockout. It’s always spectacular. I will go out there to look for it. But I will train for 12 rounds. If the opportunity for the knockout presents itself, I will take it.” 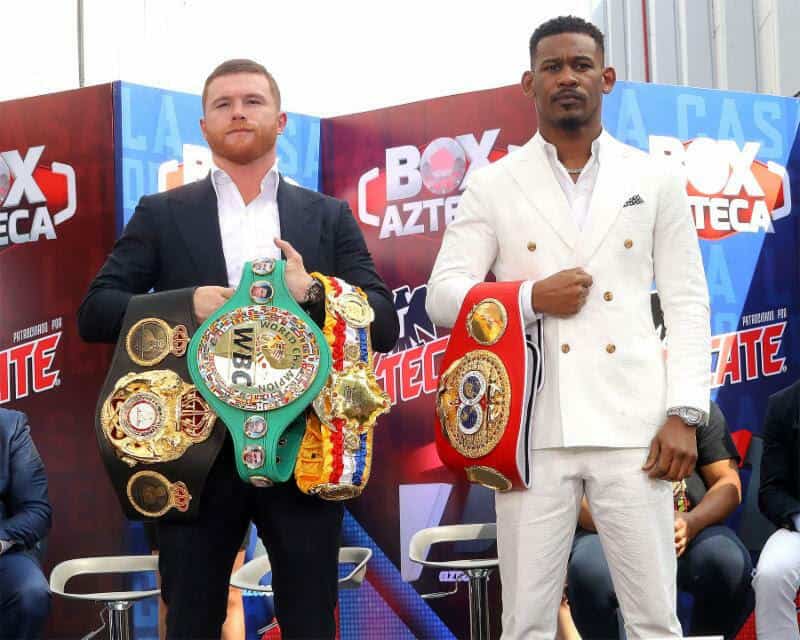 “This means everything to me. I take my hat off to Canelo for accepting this fight. He’s a true champion to me. That said, it’s our duty to make sure you all receive a great fight. I will bring my arsenal to make sure it’s a great fight.”

“Whether it ends by knockout or decision, you will see a great battle. I can speak for Canelo and myself by saying that we will give everything in this fight. I guarantee that I will not only be champion on May 4, but also king.”

“This is what we wanted. We wanted big fights to leave a big footprint in the history of boxing. It appeared impossible at first. Based on hard work and discipline, we grew little by little-he as a fighter and we as trainers. Thank you to Saul for your loyalty and of believing in us.

“Now the only thing left is to prepare day by day in boxing. We have a big fight, and I want Canelo to be the first-ever Mexican fighter to unify all the titles in a division. No one has ever done that, but Saul will.”

“I can’t help but remember watching him fight here for the first time. But the times have changed. I feel nostalgic seeing so many people and seeing what the presence of Canelo does to the boxing public. There have been many years of working to get where we are. Thank you, Saul. Thank you for believing in us.”

“This May 4, you will see a great fight. They say styles make fights. And that’s what will happen in this fight. We have the two best middleweights in the world. When you have the best fighters in the world fighting each other, you can expect a great fight.”

“Danny is a very special individual. He is a dedicated, hardworking family man. He has survived a lot on his life. I affectionately refer to him as my son. We have worked for a long time to get this far. On May 4, when he steps into the ring, I will look forward to him finishing the fight with his hand raised.”

“This fight is important because it will feature two world champions who will unify their titles to demonstrate who is the best at 160 pounds. This battle is also significant because it features two of the most resilient fighters in the history of the sport.”

“With Canelo, we have a young man who has fought as a professional since the age of 15. He’s fought the best fighters at 147 and 154, and in December moved up to 168 pounds to become a three-division world champion. With Jacobs, we have a man who defeated a challenge much tougher than a fight: a battle with cancer. He then returned to win two world titles.”

“May 4 will be a great night for Golden Boy and we expect a tremendous performance from our champion, Canelo Alvarez.”

“I want to congratulate many people involved in this promotion. We thank Golden Boy Promotions and Canelo for accepting this challenge. We want to thank DAZN, who are really changing the sport in the United States. We want to thank Tecate, the sponsors, and TV Azteca, for hosting this magnificent event.”

“When you have a champion like Canelo who wants to be the best and fights the best, we have what it makes for a great moment. With Danny Jacobs, he will not only face a great champion, but a great man. They told him he may not live again and might not walk again. They also told him that he would definitely never fight again. But here he is. We have a fight that you will forget on May 4.”

“Boxing is having a bit of a moment. And after much discussion and investment across the industry, this fight – Canelo vs. Jacobs – stands out to me as the most significant matchup on the calendar. This is the fight of the year and I am very, very proud to say that DAZN will be broadcasting it exclusively in the U.S.”

“Simply put, this fight has got everything. Champion vs. champion. A global superstar. An inspiring New Yorker with a story for the history books. And a world-class venue in the world-class fight city. The only thing missing from this blockbuster showdown is the pay-per-view price tag – and that’s because DAZN is different.”

“And so, to the two DAZN fighters on this stage, I wish you tremendous luck in camp over the next two months and I look forward to seeing you in Las Vegas for this great fight.”

Canelo vs. Jacobs is a 12-round fight for the WBC, WBA, Lineal, Ring Magazine and IBF Middleweight World Titles presented by Golden Boy Promotions in association with Matchroom Boxing. The event is sponsored by Tecate, “THE OFFICIAL BEER OF BOXING” and Hennessy “Never Stop. Never Settle.” The event will take place Saturday, May 4, 2019 at T-Mobile Arena in Las Vegas and will be streamed live exclusively on DAZN.