Due to the fallout of Fury’s decision to ditch a rematch at the one-yard line, Wilder is understandably irate.

Fury is set to begin a run on ESPN fighting also-ran contenders. In contrast, Wilder could push on with a grudge match opposite Dominic Breazeale on May 18 in New York.

As both men get set to prepare for alternatives foes, rather than each other, the mud keeps flying in both directions.

Wilder made a shock reference to Fury’s drug taking, whilst the ‘Gypsy King’ revealed the real reason he ditched the clash at the last minute.

“What an idiot, known is the fact your only highlight was you getting up off your back,” said Wilder to Fury before getting considerably personal about the Briton’s past problems.

“Since your known to snort s*** (cocaine), this is what happens when your body is on drugs. Your body Resembles the effect of it.

“I’m the champ! #TilThisDay your nothing in USA if I don’t bless you fool,” he added. 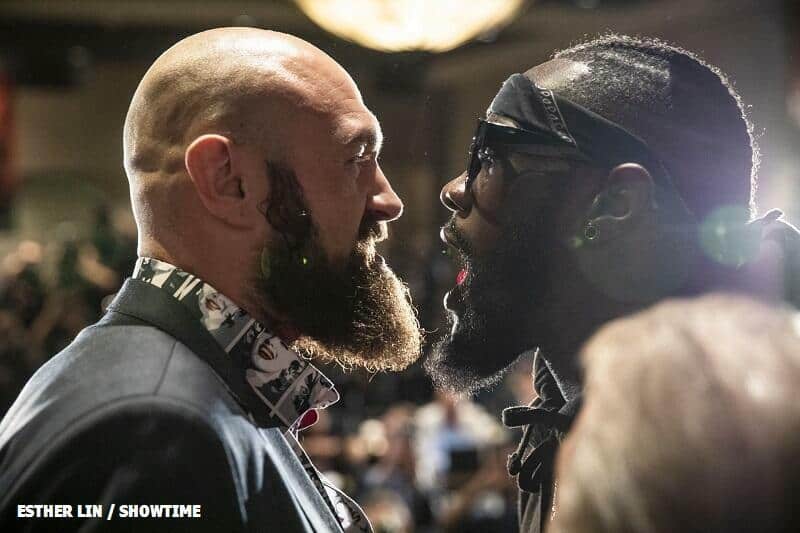 In response, Fury stated the fact he was only given a draw by the judges in their December meeting was his logic for backing off.

“The world knows I won the fight as did you and your team,” pointed out Fury. “Fool me once, shame on you but you won’t fool me twice.

“Why would I go get robbed again on Showtime. My team offered to do you a favour, pay you better and build your name. Albeit as my workman.

“You Big Dosser,” he concluded.

Former undisputed top division king Lennox Lewis then waded in on Fury’s decision to walk away when answering a social media query.

“My thoughts are that it’s not how I did things in my era. But this isn’t my era, it’s theirs,” said Lewis.

“As a fan, all I want to see is the best fight the best in their prime. The longer you put that off, the less interesting the division is.”

Joseph Parker is being linked to facing Fury next. Wilder v Breazeale is dependent on a WBC ruling regarding a recent interim announcement involving Dillian Whyte.