Boxing Legend Earnie Shavers has confirmed that he will appear and hold a Meet & Greet with his fans at the Las Vegas Convention Center for the 5th Annual Box Fan Expo on Saturday May 4, 2019 from 10am to 5pm, during Cinco De Mayo weekend.

The Boxing Expo will also coincide with the highly anticipated fight between Canelo Alvarez vs Danny Jacobs, that will take place later that evening at the T-Mobile Arena.

Shavers will make his 2nd appearance at this years’ Expo, at the Legends Boxing Foundation “LBF” booth and will be signing gloves, photos and personal items.Fans will also have an opportunity to take pictures with this legend also known as “The Acorn”, who is considered by many boxing experts, as the hardest heavyweight puncher in boxing history.

About Earnie Shavers
Shavers, is an American former professional boxer who competed from 1969 to 1983, with two further comebacks in 1987 and 1995.

A two-time world heavyweight championship challenger, Shavers is considered by many boxing experts to be the hardest heavyweight punching boxer of all time.

He scored 68 overall knockout wins, and finished 23 opponents inside the first round. His knockout-to-win ratio stands at 91.8%. Shavers is best known for his world title fights with Larry Holmes and Muhammad Ali.

He scored a heavy knockdown against Holmes, and hurt Ali badly in the second round and during the later rounds of their fight.

He also defeated world heavyweight title challengers Jimmy Young and Joe Bugner. In 2001, he released an autobiography about his life and boxing career called Welcome to the Big Time.

Today, he attends boxing events as a special guest, autograph signer, and as a motivational speaker. 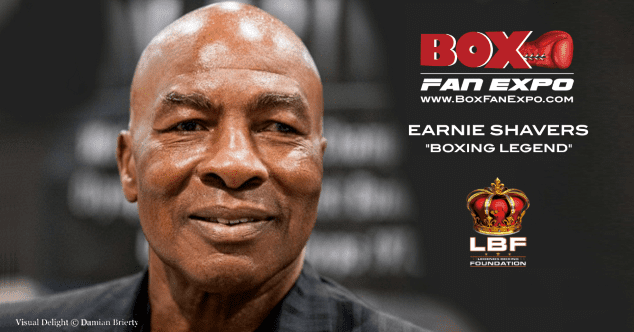 About LBF
The Legends Boxing Foundation is a boxing sanctioning body and a contemporary association whose aim is to revolutionize boxing worldwide.

LBF aims to offer a better perspective into the boxing world for smaller and bigger boxing promoters. The LBF was Founded in 2015 by former boxing-promoter Eva Rolle together with her son Robert Rolle.

Eva Rolle has organized more than 100 professional boxing events all over the world and several title fights with many different associations.

Her son Robert Rolle was a successful professional boxer (IBF European Champion / NBA World Champion) and experienced the scene from an active view.