Danny Roman, TJ Doheny ready to battle it out for super-bantamweight top spot

WBA and IBF Super-Bantamweight World Champions Daniel Roman and TJ Doheny clash in a unification battle on a blockbuster night of action at The Forum, Los Angeles on Friday April 26, live on DAZN in the US and Sky Sports in the UK.

Roman (26-2-1 10KOs) and Doheny (21-0 15KOs) clash in a unification bout that is certain to entertain. Roman was one of the standout fighters of 2018, winning a wide points decision in the first defense of his WBA crown in Japan over Ryo Matsumoto in February and followed that with another authoritative points triumph over Moises Flores in Frisco, Dallas in June.

The LA man then punctuated his year’s work by stopping Brit challenger Gavin McDonnell in the tenth round of their clash on the first American boxing bill live on DAZN in October, and now looks to make a flying start to 2019 against IBF king Doheny.

Doheny’s path has echoes of his opponents as like Roman, the Australian-based Irishman travelled to Japan to land his first World title when he took the strap from Ryosuke Iwasa in Tokyo in August.

The unbeaten 32 year old signed a promotional deal with Matchroom Boxing USA in January and swiftly made his first defense in New York against Ryohei Takahashi, stopping the Japanese in the 11th round at the Hulu Theater at Madison Square Garden, with Roman watching in the crowd.

“This is the biggest and most important fight of my career,” Roman said. “I haven’t been shy about wanting to unifying the division. This is the fight that I’ve been asking for since I became a World Champion. I need to deliver on my goal of becoming the best and a win against another World Champion puts me in that conversation.

“It will be a new experience for me because I’m not fighting a challenger, I’m fighting another belt holder. It’s exciting in a lot of ways. I’ll be at my best because I’m planning to add another title on April 26.

“It feels pretty damn good to fight in front of my hometown fans. My last five fights have been away from home, but I don’t feel any added pressure in this homecoming of sorts. I know I have a job to do. Nothing is easy at this point. It’s going to be a heck of a fight. Two World Champions fighting for control of the division. What more could you want?”

“Danny is one of those rare boxers that is motivated and committed to fighting the very best,” said Ken Thompson, President, Thompson Boxing Promotions. “He understands the risks that he is taking, but that’s what drives him. Against Doheny, he gets to show the world what he’s made of. It will be a tough fight, but one that Danny is more than capable of winning. We expect him to fight his fight and come out with another win and another World title.” 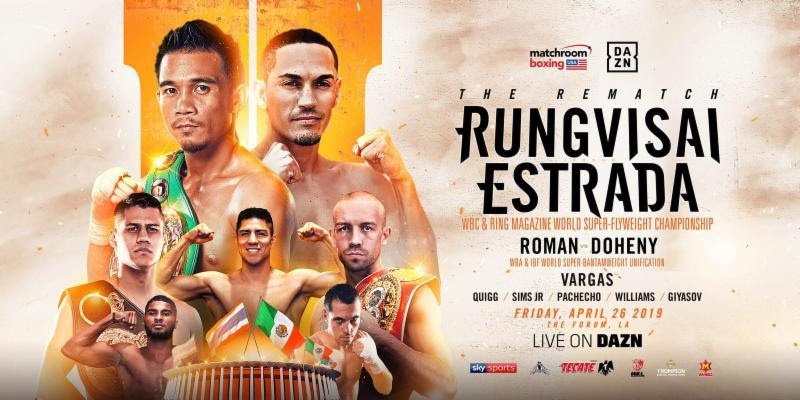 “This was my ideal scenario,” said Doheny. “Get the voluntary defence out of the way, then go straight into the unification, so great work from my team, and Eddie Hearn with Matchroom Boxing USA for getting this fight on. It’s unbelievable, it would mean the World to me. It’s just another boxed ticked, after I won the World title, the next goal was to become a unified Champion. I’m looking forward to achieving that.

“Danny’s a great fighter, he adds a lot of pressure, he’s a great puncher, great punch selection, he’s got it all really. It’s going to be a great fight between us, and I won’t be surprised if the fans get to see a bit of a war. Fighting Danny in his home city, that doesn’t bother me. I’ve been fighting on the road my whole career, so it will be no different to me. It’s me and him in the ring, and it’s going to be all action.”