Eddie Hearn and Stephen Espinoza aired their dirty laundry in public once again on Monday evening. The pair revealed intricate details of their split over Anthony Joshua.

Fighting on Showtime and seemingly in a happy place, Joshua then pledged his future to DAZN in a move which ended his US Pay-Per-View relations.

Hearn and Espinoza’s epic Twitter battle has now revealed why both went their separate ways.

Ultimately, the initial parting now looks to have played a part in the rejection of a $50 million offer from Deontay Wilder to fight on the network last year.

The row began with Espinoza replying to a tweet on the failed Joshua v Wilder talks.

“Contract was sent and Matchroom saw it. Contract said Sky got the UK rights,” he said. 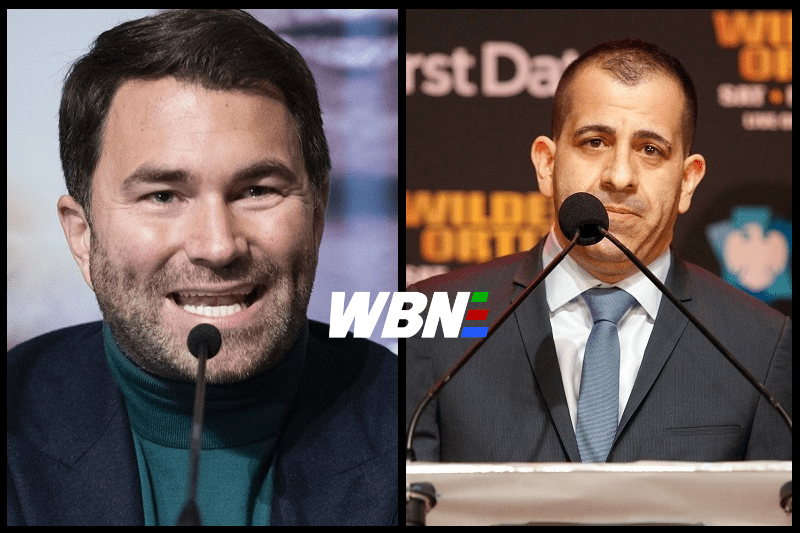 SE: Lies? You mean like when you told Klitschko and HBO that AJ didn’t have a multi-fight agreement with Showtime. Even though there were still three fights left on the deal?

Experiences like that are why we keep all the receipts. I’m sure this excerpt will look familiar to you.

EH: Show the contract you sent

SE: “Never said I sent it. Wilder sent it and you confirmed receipt.”

EH: “So now you are saying the personal email from Wilder (that was one paragraph) offering $50m was a contract! Hahaha – CONTRACT WAS REQUESTED AND NEVER SENT!”

EH: “I repeat, despite requests we NEVER received a 1 page, 3 page or 50-page contract. If I’m lying then show the contract you sent.

SE: “Again, never said “I” sent a contract. And I’m not going to expose private business arrangements in a Twitter discussion.

“Considering your attempt to deny AJ’s 6-fight Showtime deal after just three fights, it’s not surprising that you wouldn’t remember this one either.”

EH: “You aren’t going to expose private business arrangements on Twitter but you don’t mind discussing AJ’s previous confidential contract. You are a beauty. Anyway, I’m glad we cleared up that a contract was never sent.”

SE: “Didn’t release anything that wasn’t already public, other than your failed attempt to ignore the agreement you already entered into.

“You didn’t answer the question. A 3-page contract was sent. You said it wasn’t. So what do you call the 3-page document that you received?

EH: “No – a 3-page contract was never sent. Read my tweets not 1 page, 3 pages or 50 pages. You lost AJ because you ran out of money you know that. You also don’t have one of the top 3 heavyweights under contract. I get you are under pressure but don’t tell porky pies. Have a nice day. 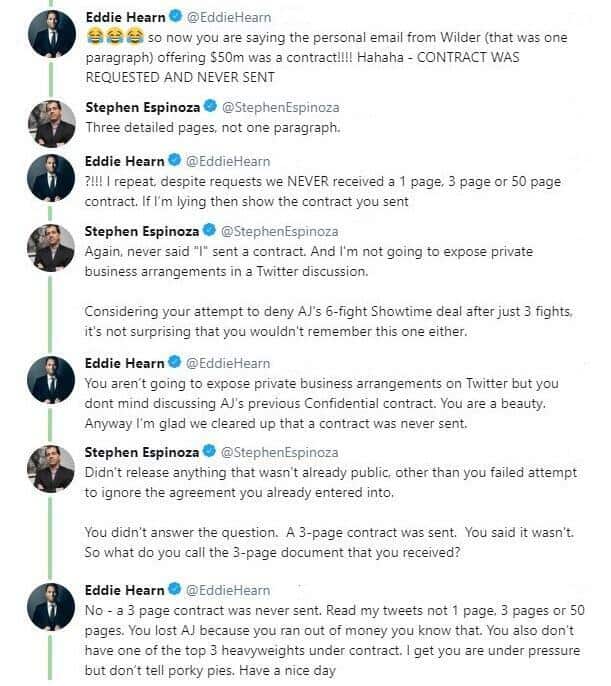 You don’t dispute that you received a 3-page document with deal terms, but you don’t consider it a contract…just like you didn’t consider the AJ multi-fight deal a contract until you got legal advice telling you otherwise.

EH: “I guess you aren’t going to show this contract – the one that doesn’t exist. Re your AJ issue, he’s gone mate – as Elsa (from Frozen) said – ‘Let it go!’

“Just reminding you of your consistent attempts to misrepresent facts and your apparent inability (or refusal) to recognize contractual obligations.

EH: “Our contract was honoured and then you ran out of money. However, when you tried to approach AJ’s trainer on the sly about an extension it was game over baby. Conor (McGregor) was right (when he called you a weasel).”

SE: “Ran out of money after the AJ contract finished in March 2018? Another blatant lie. We did nine more 2018 events after that. Quite a feat to do that with no money.

It seems quite clear Hearn and Joshua won’t be working with Showtime anytime soon, leaving a fight with Wilder firmly off the menu unless the American fights on a different network.

Wilder is a TV free agent meaning the fight isn’t completely dead. Although it would take some working out as Wilder currently sees himself as a PPV fighter.