The fight starred as the main event of Premier Boxing Champions on FOX and FOX Deportes Saturday night from Microsoft Theater at L.A. Live in Los Angeles.

“I’d like to thank all the fans that came out tonight to support me,” said Santa Cruz.

“I tried to do my best and do what I could to give them a great fight. I would have loved to have been even better. But he’s a really tough and solid opponent.

“I hit him hard to the body and head very well, but he didn’t go down.”

Santa Cruz got off to his usual fast start, throwing hard hooks to the body and mixing in uppercuts to try to keep his opponent at bay.

When Rivera initiated the offense, Santa Cruz was able to counter with precision, snapping back the head of his opponent and oftentimes stopping in his tracks.

Rivera had some success with a counter left hook he threw as Santa Cruz threw his own, but was unable to put together enough offense to win early rounds.

As the fight reached the middle rounds, Rivera began to try to smother Santa Cruz and negate his reach advantage, before trying to catch him with a big power shot. 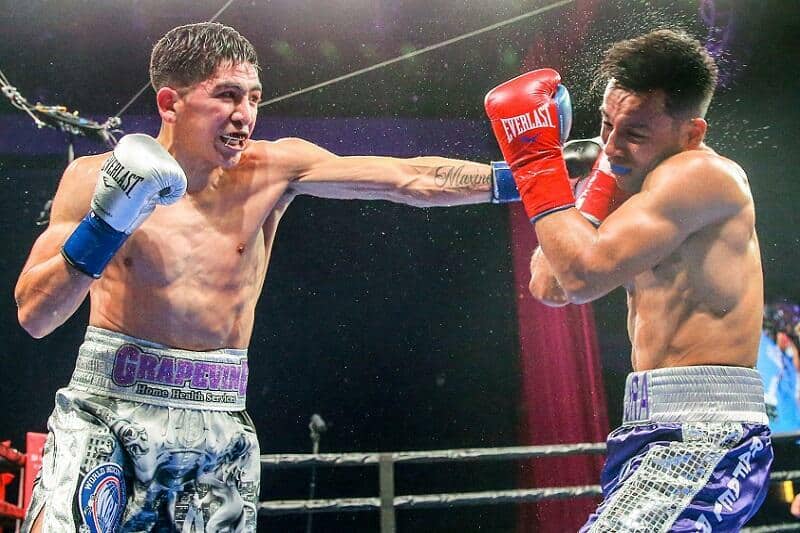 According to CompuBox, 252 of the combined 441 punches landed in the fight were done so in close range.

“I’m very happy with my performance and I thought I gave everyone a great fight,” said Rivera.

“I was in there with one of the best fighters in the world and throwing punches and exchanging with him.

“More than anything, I’m very proud to have fought 12 rounds with a great world champion like Leo Santa Cruz.”

As Santa Cruz continued to control the pace of the fight, he began to use more of his boxing ability that his father and trainer, Jose Santa Cruz, who has been battling cancer, was encouraging him to exhibit.

“My father means the world to me,” said Santa Cruz. “When I step in the ring, I say that I don’t want to let my dad down. I want to keep him happy so he can keep fighting his cancer.”

Rivera continued to battle until the final bell, including a wild final 10 seconds of the final round that saw both men throwing an intense barrage of punches before the bout ended.

“People will know me better now and it was a great experience,” said Rivera. “I want to continue to push towards another world title opportunity. I want to be a world champion. But it didn’t happen tonight. I will continue to fight and show everyone what I can do.”

After 12 rounds, all three judges saw the fight in Santa Cruz’s favor by the score of 119-109. According to CompuBox, the 1,350 punches thrown by Santa Cruz were the second most of his career.

“I want to fight the best,” said Santa Cruz. “I want to fight any of the champions at featherweight. Or maybe have a third fight with Carl Frampton. I’d like to be back this summer and fight three times this year against the best in the division.”

The co-main of the evening saw undefeated former champion Omar Figueroa (28-0-1, 19 KOs) earn a decision victory in a back and forth welterweight brawl against John Molina Jr. (30-8, 24 KOs) after 10 rounds of action.

“I thought it was a good fight,” said Figueroa. “We came out and did what we wanted to do. Unfortunately, I hurt my hand so I started to slow down a little bit after the third round.

“I know I could have hurt him if I really pressed the action. I didn’t want to make the hand any worse.” 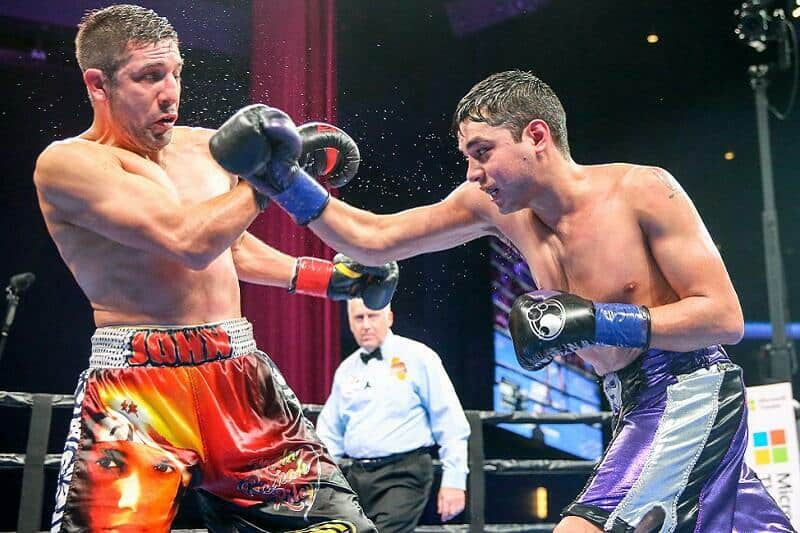 The action began early, with Figueroa showing his typical aggressive style, snapping sharp overhand rights and pushing Molina to the ropes. Molina was able to keep Figueroa at bay at times by using his jab to set up big power punches.

In round three Figueroa began to switch between southpaw and orthodox, landing several clean left hooks from the southpaw stance.

“But at the end of the round, Molina landed perhaps the most significant punch of the fight, stopping Figueroa in his tracks with a clean overhand right.

The action continued into the second half of the fight. Molina thew more punches and Figueroa landing the higher percentage.

“I thought I won comfortably. Aside from some middle rounds I felt like I was in control,” said Figueroa.

“He caught me with a wake up punch in the third round. I wanted to test his power because I had heard so much about it. He’s definitely strong and durable. When I hit him with hard shots, he withstood them.”

Molina threw 751 punches to 668 from Figueroa according to CompuBox, but it was Figueroa who ended up out landing Molina by a 241 to 159 punch margin. Figueroa also out landed Molina 10-4 and 11-1 in the final two rounds.

“I take my hat off to him,” said Molina. “He is a former world champion. I have been in there with a bunch of guys and he has a decent punch. I don’t want to say the weight was an excuse, but I know what it takes to be able to fight in a weight-based sport and work toward a certain goal.”

“I expected Marshall to go inside and attack the body, but he was trying to box,” said Fundora. “Once I figured out that he didn’t want to bring the fight, we brought it to him and it went our way.”

The southpaw Fundora began to break through in the second round. He used a combination of straight left hands and uppercuts to stun his opponent.

Marshall was able to land multiple strong straight right hands by countering the charging Fundora, but was not able to keep his opponent from coming forward.

“He was stronger than I thought he was and he’s a good boxer,” said Marshall.

“I thought when I let my hands go I was doing pretty well, but he caught me with a couple good shots. His height wasn’t a problem because I was able to get inside and land, but he was able to land more than me.”

Early in round three, Fundora landed a sweeping left hook-uppercut combo that connected clean on Marshall and put him on the canvas.

Marshall was able to get to his feet, but Fundora saw his opportunity and continued to land a barrage of uppercuts and straight lefts.

Referee Jerry Cantu jumped in to stop the bout at 1:08 of the third round. Fundora was the more effective and accurate puncher, landing 39 percent of his shots, to 26 percent from Marshall, according to CompuBox.

“I want to move up the rankings and get to the top five by the end of the year,” said Fundora.

“Anything is possible though and maybe we’ll be fighting for a title by then. This division has a lot of excellent fighters. I’m going to be ready when the time is right.”