February 15, 2019 – Shohjahon Ergashev overcame a five and a half-inch height advantage recording a unanimous decision victory over fellow undefeated prospect Mykal Fox in the 10-round super lightweight main event of ShoBox: The New Generation Friday on SHOWTIME from the Kansas Star Casino.

With famed trainer Sugarhill Stewart shouting instructions from his corner, the Detroit-based power-punching Ergashev (16-0, 14 KOs), by way of Fergana, Uzbekistan, did enough to beat the rangy 6-foot-4 Fox (19-1, 5 KOs) in a matchup of two exciting undefeated prospects.  The scores were 96-94 and 98-92 twice (Click HERE to watch).

“I didn’t think it was a close fight,” said Ergashev, who was only able to land two jabs the entire fight missing more than a hundred times. “He was awkward and his head was very low. He was very long and tall too, so it was hard to hit him in the head. I expected him to run all fight and he did.”

Ergashev said he was disappointed in his performance. “I come to fight,” he said. “I like fighters who stand and fight. I’m a fighter. I like guys who let me showcase my skills and bang. Fox wasn’t even boxing. He was just running around the ring. I wanted to sit down and fight.”

The 23-year-old Fox of Forest Hill, Md., one of the tallest fighters in the 140-pound division, said he agreed with one of the judges’ cards, but not the two 98-92s. “I knew it was close, and thought maybe I did enough to win,” said Fox, who did a nice job slowing the pace of the fight. “I think it was closer than 98-92. I took a few shots, but I knew he was going to be strong.”

Fox became the 186th fighter to lose their undefeated record on the prospect developmental series.

Fox, who had his father Troy and brother and fellow professional boxer middleweight Alantez in his corner, became the ninth fighter in ShoBox history to have a brother who also fought on ShoBox joining brother duos like Jermall and Jermell Charlo, Andre and Anthony Dirrell and Glenn and Nonito Donaire. 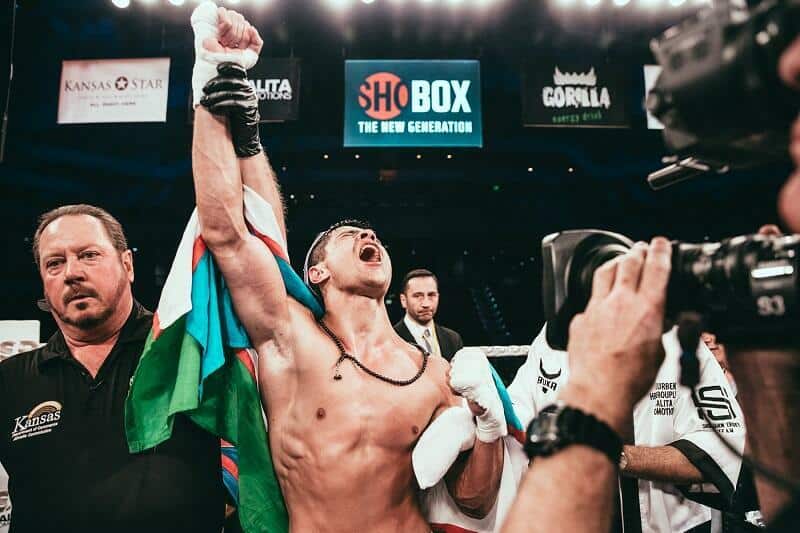 In the opening bout of the telecast, England’s Thomas Ward (26-0, 4 KOs) put on an impressive performance and showed U.S. fight fans he will be a force to be reckoned with in the wide-open 122-pound weight class as he won a unanimous decision against ShoBox veteran Jesse Hernandez (11-2, 7 KOs). Click HERE to watch a recap.

Fighting for the first time in the States, the WBO No. 4-ranked Ward of West Rainton, England, scored a fourth-round knockdown and took the 10-round super bantamweight fight easily against Fort Worth’s Hernandez. The scores were 100-89, 99-90 and 98-90.

“I came to America and fought a home fighter and won quite comfortably, I even got a knockdown,” the 24-year-old Ward said. “He was supposed to be the puncher and I was supposed to be the boxer. A lot of people think I can’t punch, then they get over-confident and get clipped. Then they realize I can punch. Look at his face compared to mine. That will tell you something.”

Ward started strong, and seemed to get better as the fight went on. “He’s been on the gas from the opening bell, and he hasn’t gotten off it,” said International Boxing Hall of Famer and ShoBox play-by-play commentator Barry Tompkins in the final minutes of the 10th and final round.

Ward exceeded double-digit connects in every round and topped 30 in five of the final six rounds while Hernandez reached double digits just three times.

It was a clean left hook that sent Hernandez to the canvas in the final seconds of the fourth round (Click HERE to watch). Ward controlled the middle of the fight and landed consistent three-punch combinations against Hernandez, who at the end of round six was warned by referee Bill Clancy that he was taking a lot of punishment and had to show him something or he would stop the fight. At the top of the ninth, the referee still concerned about Hernandez lack of action, called the doctor and asked once again the same question. The doctor cleared Hernandez to continue.

Hernandez said he felt Ward’s power, and was impressed. “Yeah, he got me with that left, but I recuperated,” he said. “But all the credit to him. A knockdown is a knockdown.”

Ward said Hernandez asked for the fight, but wasn’t prepared for the it. “I knew he was a good, experienced fighter,” Ward said. “He’s fought some good guys and knocked out some good guys. He’s supposed to be a puncher, but I was just on another level tonight.

“I wanted a good fight to showcase my skills and I’m glad the people on ShoBox got to see it.”

Shields talked about her disdain for Hammer. “I’m going to keep it 100 percent professional,” she said. “I don’t like her as a person but that doesn’t matter. I want to beat her well. She’s just mad because I’m meaner that her and I’m better than her. I’m the GLOAT. Greatest lady of all time. I’m fighting every person that they say I can’t beat. I’m going to unify my division. I’m going to be the undisputed champion and nobody is going to be able to say otherwise.”

Friday’s fights were promoted by Salita Promotions. The full telecast will replay on Monday, February 18 at 10 p.m. ET/PT on SHOWTIME EXTREME and will be available on SHOWTIME ANYTIME® and SHOWTIME on DEMAND®.