The Briton participates in his long-awaited U.S. debut at the iconic Madison Square Garden in New York.

Joshua v Miller takes place on Saturday, June 1, live on Sky Sports Box Office in the UK and DAZN in the U.S.

Joshua (22-0, 21 KOs), defended his World titles in September. The end came with a devastating knockout of dangerous Russian Alexander Povetkin at Wembley Stadium. The victory was the Olympic Champion’s fourth straight stadium fight in front of over 80,000 fans.

It was a crushing return to the scene of his historical triumph over legendary Champion Wladimir Klitschko in April 2017. On that occasion, he produced the performance of a lifetime to claim the WBA crown in an unforgettable battle in front of a post-war record crowd of 90,000 at England’s National Stadium.

The British sensation blasted Povetkin to the canvas with a brutal assault in the seventh round. Joshua then floored the WBA mandatory challenger again. It signalled a sudden and dramatic ending to his 22nd professional victory in his home city.

And now he will follow in the footsteps of Heavyweight greats such as Joe Louis, Joe Frazier, Evander Holyfield and Muhammad Ali when he crosses the Atlantic to silence Brooklyn’s brash ‘Big Baby’ Miller at ‘The Mecca of Boxing’. 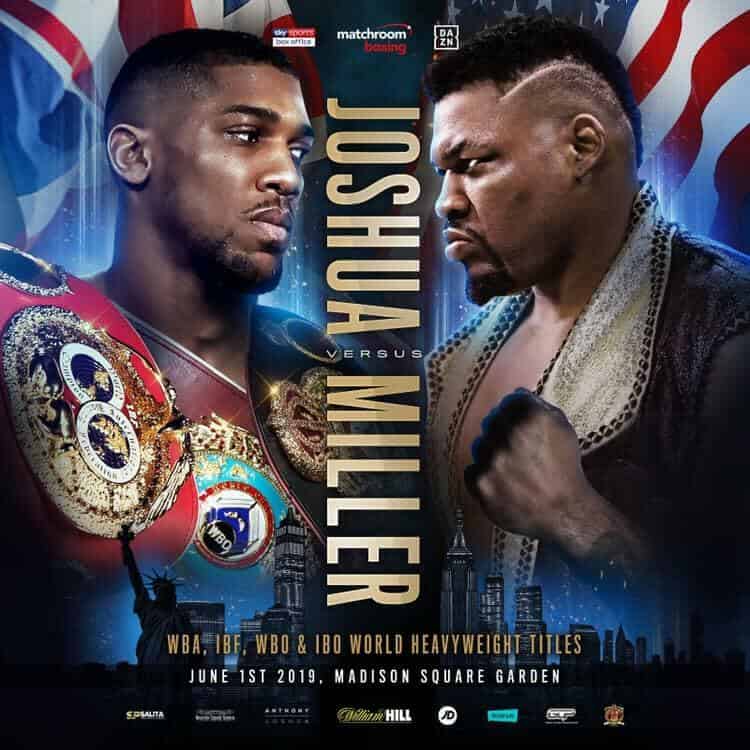 “June 1st I am heading to The Big Apple and I plan to embrace the culture and leave with an appetite for more,” said Joshua.

“I will be fighting Jarrell Miller at the legendary Madison Square Garden. It has been an honour and a blessing to fight at some of the best venues in the World at home in the UK, not least Wembley Stadium. But the time has come to head across the Atlantic and defend my Heavyweight titles in the USA.

“I am looking forward to taking on another challenge with a good boxer and a brilliant talker. It will be an exciting fight.”

Ending with his prediction, Joshua concluded: “I will leave nothing to chance. I plan on dismantling Miller in style because I want to make my mark.”

“We are delighted to be showing this massive occasion on Sky Sports Box Office. Our team will provide every step of an enticing build up,” said Adam Smith, Head of Sky Sports Boxing.

“Every boxer wants to conquer America and the time has come for AJ at the iconic Madison Square Garden.

“It’s been the home of countless classics. From Ali vs. Frazier to the controversial bout that was called a draw between Evander Holyfield and Lennox Lewis 20 years ago. It’s another chapter in the Joshua story.”

“In New York awaits a hometown fighter in Jarrell ‘Big Baby’ Miller who has been quite vocal about his plans to spoil Joshua’s stateside arrival. He poses a real threat to dethrone the Heavyweight king in what will undoubtedly be a major international attraction. We are eager to see what will unfold June 1 on DAZN.”

“The World Heavyweight Championship at Madison Square Garden is unlike any setting in the World. We couldn’t be more thrilled to host Anthony Joshua and Jarrell Miller,” said Joel Fisher, Executive Vice President, MSG Marquee Events.

“The legacy of Heavyweights at ‘The Mecca of Boxing’ that began with the likes of John L. Sullivan. Followed with Gene Tunney, ‘Jersey’ Joe Wolcott, Muhammad Ali, Joe Frazier and Joe Louis. Then carried on with Evander Holyfield, Wladimir Klitschko and Lennox Lewis.

“As a result, this will continue when Joshua and Miller step into the famed Garden ring in front of a packed house on June 1.”