New England’s newest promotional company, Shearns Boxing Promotions (SBP), held a press conference today to formally announce the presentation of its inaugural event, “Every Man For Himself,” on Friday night, March 15, at The Palladium in Worcester, MA.

In the co-featured event, undefeated Providence light heavyweight Angel Camacho, Jr. (15-0, 5 KOs) returns to the ring in a six-round bout versus Taronze Washington (17-26, 9 KOs), of Dallas.

One of Worcester’s most celebrated amateur boxers this century, heavyweight Owen Minor, will make his professional debut in a four-rounder versus Corey Morley (0-2-1), of Philadelphia. 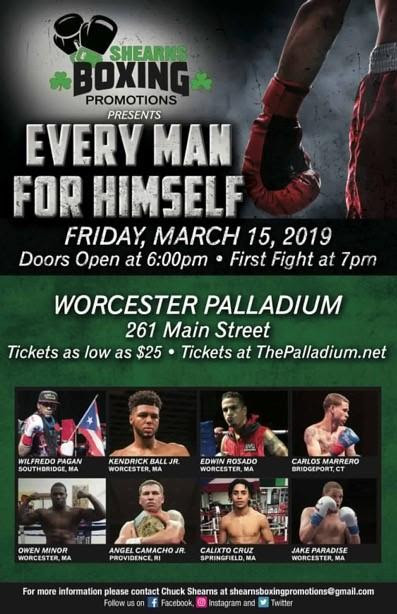 Chuck Shearns, Shearns Boxing Promotions: “We want New England guys fighting each other, which is something Massachusetts has been missing, Rhode Island and Connecticut have been doing it. We’re hoping to bring it back, it’s our goal. Every fighter on this card has a reason to win, whether it to further their careers nationally, make their pro debut, a few really need a win, and have some who’ve really stepped up to take tough fights.”

Jimmy Burchfield (CES Boxing promotes Kendrick Bell, Jr. and Angel Camacho, Jr.: “CES Boxing and Chuck, we know business, and we know it takes family. We’re honored that he’s stepping up to the plate. Promoting a show is a monstrous job. Life is a family.

“Worcester is a fighting city. The sponsors Chuck already has means that they recognize a good promotion. There are so many components to promoting. It may be 8 to 10 weeks without money coming in to fight night. That’s why so many promoters leave right away. Fight night is easy. Fighters are the most important. They risk their lives.”

“Kendrick Ball, Jr.: I want to thank Chuck and Jimmy because I wanted to fight in my hometown, in in the main event, and for a title. I also wanted to fight on the same card as my cousin, Owen (Minor). I know I’m the best middleweight in New England and I’m going to win that strap. Watsch me in the ring!”

Angel Camacho, Jr. “This platform in boxing isn’t just about me. God game me a talent. I can reach a lot of kids and tell them they can achieve their goals. After a few injuries, I was kind of lost, and I didn’t know what to do. I’m coming back March 15 and getting my 16th win. I’m excited to be fighting again.”

Owen Minor: “I want to thank Shearns Boxing Promotions for putting me on this show to make my pro debut. It’s been a long time, but I’m here, and come March 15 to see why I’ here.”

Wilfredo Pagan: “I can’t wait to get my sixth victory. I don’t know much about Galindo, but I heard he’s a tough fighter. I’ll do what I do to put on an entertaining fight for the fans.”

Jake Paradise: “I’m so happy to be here. I’m getting on with my career and I’m going to put on a good show.”

Edwin Rosado: “I’m going to put on a good show. I’m training hard to do what I do.”

General admission tickets are priced at $25.00 and available to purchase online at thepalladium.net. Boxers on the card have $50.00 and $25.00 to sell.