The next great Filipino boxer, “Mighty” Aston Palicte, knocked out his previously unbeaten Puerto Rican opponent Jose “Chiquiro” Martinez in the second round of this past Thursday night’s World Boxing Organization (WBO) Junior Bantamweight World Title Eliminator, before a sold-out crowd in the Oak Ballroom at Viejas Casino and Resort in Alpine, California.

Palicte vs. Martinez, presented by Roy Jones Jr. (RJJ) Boxing Promotions in association with Miquel Cotto Promotions, was the inaugural event live-streamed on UFC Fight Pass® under a new agreement between Palicte’s promoter, RJJ Boxing, and FIGHT PASS, to live stream up to 72 professional boxing events over the next three years.

Palicte (25-2-1, 21 KOs), rated No. 1 by the WBO, took on No. 2- ranked Martinez, the reigning North American Boxing Organization (NABO) champion, in the main event to determine the mandatory challenger for WBO junior bantamweight title-holder Donnie Nietes, the four-division world champion, also from the Philippines.

Palicte was coming off a controversial 12-round split draw with Nietes last September for the then vacant WBO Junior bantamweight championship. Many at ringside felt that Palicte should have won the Filipino showdown and now he will have a richly deserved match.

“I knew Aston wanted to make a statement against Martinez and boy did he ever deliver,” RJJ Boxing CEO/Co-Founder Keith Veltre said. “What a way to start our series on UFC Fight Pass. From the opening fight to the main event there was nothing but action. Our matchmaker, Guy Taylor, has been delivering great content.”

After a standard feeling-out first round, Palicte exploded in the second round, as he walked through Martinez’ punches, showing no respect for his opponent’s power. Palicte dropped Martinez with an overhand right, repeating the decking moments later with the same punch. Martinez beat the count, but Palicte unleashed a flurry of unanswered punches, which resulted in the referee halting the action.

“I will start the process on making a deal with Nietes’ people,” Veltre added. “We’re looking forward to seeing Aston become world champion.”

In the co-featured event, a rare showdown between a pair of unbeaten prospects, Fort Worth, Texas featherweight Edward “Kid” Vasquez (6-0) out-boxed Brandon “2 Smooth” Cruz (6-1, 4 KOs), fighting out of nearby San Diego, in a back-and-forth fight for a key win by way of a sixth-round split decision. 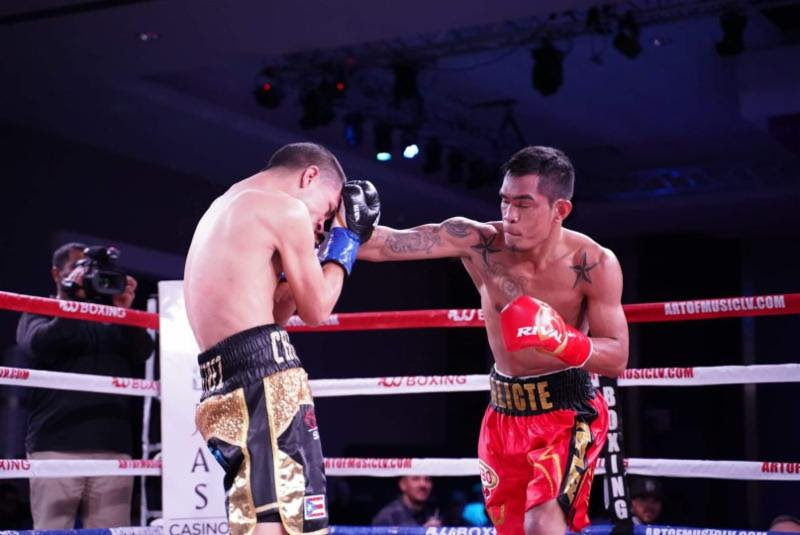