An interview conducted midway through the night turned very public indeed between the pair.

The two were in the same vicinity just days after talks broke down for Whyte to face Anthony Joshua on April 13 – as previously promised.

Whyte wanted a couple of more million pounds than AJ and Hearn were willing to bring to the table. Joshua has since moved on to Jarrell Miller in June.

As they thrashed out their differences in front of their usual source of IFL TV, some sensitive subjects came to the fore.

One of those was the fact Whyte stated he’d been given information on the $50 million offer made to Joshua to face Deontay Wilder last year.

“He offered Joshua $50m and he didn’t take it. I’ve been over to America and I know from a real source. I’ve seen that the money was there,” Whyte told Hearn on the IFL TV clip.

As their debate got a little more animated, Whyte told Hearn he knows the contract was real when spending time with Showtime’s Stephen Espinoza recently.

‘The Bodysnatcher’ went over to Las Vegas for the Manny Pacquiao v Adrien Broner fight. There were soon rumors of a meeting with Premier Boxing Champions over a move. 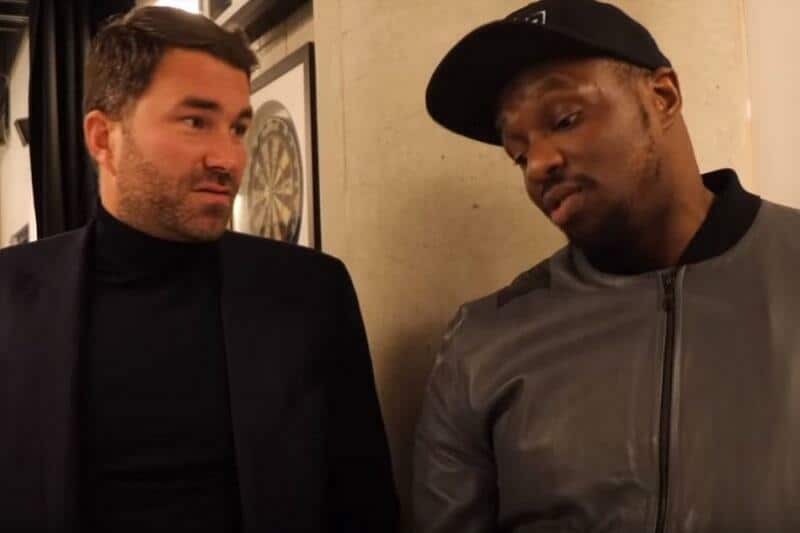 “Espinoza said the dough was there. I know you team AJ first, so I’m not getting involved,” he added.

At the time, WBN was heavily involved in breaking news of negotiations. Also shown proof the $50m was a solid and guaranteed deal.

Hearn had questioned the funds were there many times as negotiations went back and forth. Ultimately, Joshua wanted to push through a Wembley fight with Alexander Povetkin.

Joshua had no possibility to fight in America that December, meaning Tyson Fury was approached instead.

Wilder and Fury now have a rematch to follow through, leaving Joshua out of the picture.

But where does that leave the in-form Whyte?

Well, there’s currently nothing official between Hearn and Whyte. Just a working handshake. Which means Whyte can move freely if required.

Judging by their candid nature, Whyte is currently comfortable with Hearn. Added to the fact that his own fighters are under the Matchroom banner.

Fabio Wardley and Richard Riakhpore are signed with Hearn, meaning any move away by Whyte is unlikely in the future.

Without Joshua in play, Whyte has now turned his attention to securing a mandatory spot with the World Boxing Council.