Ball vs. Richards had a cautious opening. Both men only throwing occasionally and not letting their hands go.

That was until a huge Richards straight right hand floored Ball.

The fight resumed its tentative stage until it exploded when Richards landed another right hand.

The two exchanged blows until Richards dropped Ball with a short right hook to the body.

Two more right hands dropped Ball again who was done by that point.

Bouncing around the ring to survive, Richards hunted down Ball to finish the fight with a barrage of jabs and hooks.

Richards picked up the WBA Continental belt with a 3rd round stoppage at the time of 2:27. 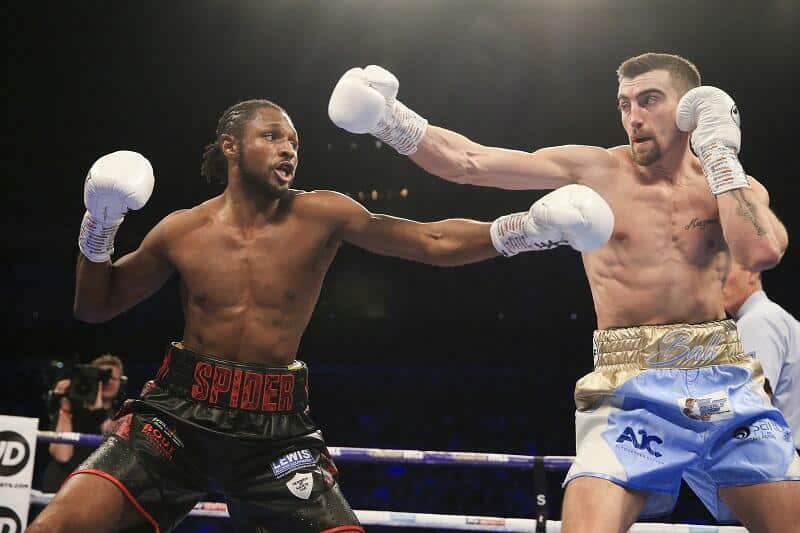 Wardley walked through Dessaux at the O2.

Using a counter left hook to push the Frenchman back, Wardley followed up with a right uppercut to end the fight at 1:43. Improving his record to 6-0.

Okolie started slowly but clearly had the upper hand, using a jab to back up Lodi.

Much better from Okolie who landed a sweeping right hand to back up Lodi before landing a straight right to floor his man twice.

In the third, Okolie sealed the deal with a quick turnaround right hook to send Lodi to the canvas for the last time. Fight stopped at 1:13.

Wadi Camacho entered the ring after the fight to announce the March 23rd fight at the Copper Box Arena.

Cash produced a clinical performance to pick up the Commonwealth middleweight strap.

After knocking Abolaji down with a jab, Cash went straight back to work. He switched his targeting to heady and body until an overhand right was the answer to a defeated Abolaji.

Dropping him again, the fight ultimately ended at 2:45 of the first round.

Fitzgerald played the bully against the much smaller Mitev. He cut off the ring and used a barrage of heavy shots. A short right hand dropped Mitev late in the first round.

A huge left hook landed on the groin area of Mitev where he took some time to recover on the canvas. After getting up, Fitzgerald made short work of Mitev. He used an uppercut to finish the job at 1:24 in the 2nd round.

The pace slowed down in the fourth where Zaxo clearly outworked his opponent. The fight finished on the scorecards.