A great night of fights took place at Mohegan Sun Arena in Uncasville, CT last night (Saturday), as JOE DEGUARDIA’S STAR BOXING presented another exciting SLUGFEST AT THE SUN. The undercard had a distinct New England flavor as the crowd came out early and loud, cheering on their local New England talent.

Taking on Hungarian puncher, ADAM MATE (now 28-14 21 KO’s), Seldin, as usual, came streaming across the ring from the opening bell.

Throwing precise haymakers, and clearly looking for the knockout, Seldin stalked Mate and just twenty seconds into the first round, landed a devastating right hand that sent Mate crumbling to the floor.

To Mate’s credit, he rose off the canvas attempting to stabilize himself, defeating the referee’s ten count. However, Seldin pounced yet again, trapping Mate in the corner, dropping him once again for the final time with precise bombs.

Joe DeGuardia promised boxing fans to not blink during this scheduled ten round main event and the Mike Tyson-like Seldin blitzkrieg lived up to the promise, with the Knockout coming at the official time of 0:48 seconds of the first round.

Cletus Seldin said this about his devastating KO victory:

“I am happy to be back. I have now had 2 fights since coming back from the Tommy John surgery I had last year and i feel like it’s back to normal. I can’t wait to get back in the ring again and want to thank Joe DeGuardia [Star Boxing] for keeping me busy and all of the “Hammer-Heads” who came out to support me. I am ready for the top guys in my division.”

“ACTION” ANTHONY LAUREANO (now 10-0 3KO’s) and RONALD RIVAS (5-9-2 3KO’s) put on a show for every minute of their 8 round co-feature bout, entertaining the crowd who cheered with an ever-increasing excitement and intensity throughout the bout.

Both fighters earned the respect of the fans for their effort, but it was Laureano who showed his superior skills, using an effective jab, left hook, damaging body punching, and unmatched determination, which led him to a unanimous decision victory by scores of, 80-71, 79-72 (x 2).

The fighters engaged each other from the opening bell and by the second round Rivas was cut and bleeding. In the third, Laureano banged the game Rivas on the ropes and across the ring. Laureano’s ceaseless attack overwhelmed Rivas in the 5th round sending him to the canvas with a left hook to the body.

The slugging continued for the remainder of the fight to the delight of the cheering crowd at Mohegan Sun, concluding with Laureano throwing punches in bunches from all angles. Be sure to tune in for the replay of this one as the hometown hero, Anthony Laureano put on a show for his local fans. 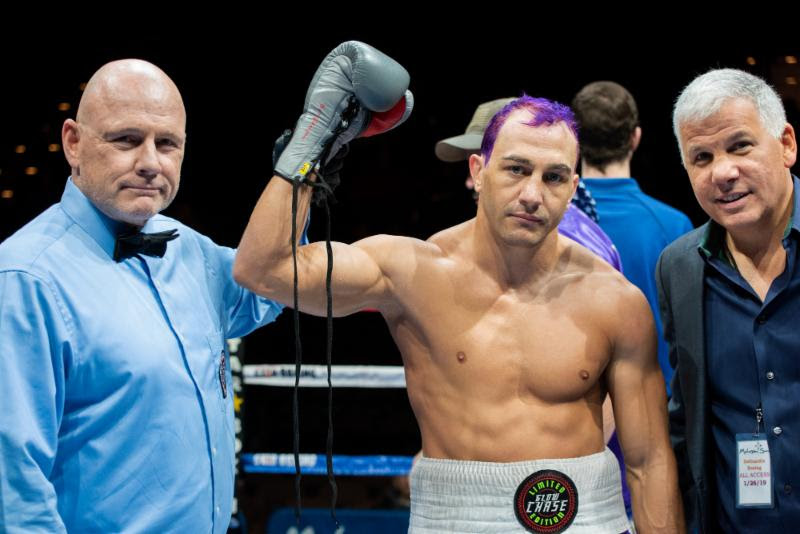 Laureano on returning to Mohegan Sun, and his performance on Saturday night:

“I felt good in there and just love to fight in there. Rivas was a tough and determined fighter and I have much respect for him. Thank you Star Boxing for keeping me busy and moving me and thank you Mohegan Sun, NESN and all my fans – I appreciate the support.”

However, Suarez would not be denied, finding openings in the second round, as blood began to come from the nose of Foster. The two waged war against each other, for the entirety of the 8-round title fight in a fantastic tactical battle reminiscent of yesteryear. Having gone the distance, the judges scored the bout 79-73 (x3) in favor of William Foster, who retained his Jr. NABF Super Featherweight title in an exciting bout.

JACOB “LEFTY” MARRERO (now 2-0 1KO) seemingly had all of Bridgeport behind him in his second professional bout, as he took on Hungarian ZSOLT KARVAJ (now 3-3 3KO’s) in a scheduled 4-rounder. Marrero wasted no time sending Karvaj to the canvas two times in the opening round. Finally, a straight right hand by Marrero scored purely on the chin of Karvaj, causing referee Danny Schiavone to halt the action with 1:07 expired in the first round.

In a thriller, fan favorite NATHAN MARTINEZ (now 2-0) had his second professional bout against a tough Philadelphian, JERROD MINER (now 1-3-2 1KO). The opening round saw great back and forth action, as Miner scored with two hard rights, while Martinez found a home for his right hand as well.

It was a very close first round but the second saw Martinez go on an impressive body attack, landing sharp, devastating shots to the midsection of the Miner. After 4-rounds of great action, the judges saw it, 40-36 (x2), and 39-37, in favor of Nathan Martinez, who improved to 2-0.

In a 6-round welterweight bout between RONNIE “TEFLON RON” AUSTION (now 10-1 7KO’s) and Waco, Texas native, MARQUIS “THE HAWK” HAWTHORNE (now 6-9 1KO) both fighters began slow, in a feeling out first round. Austion looking to counter, while Hawthorne pressed, seemed to be the theme throughout the fight.

Finally, in the fourth round, the action began to pick up, as Hawthorne was both throwing and landing in high volume. After losing a point for holding in the fifth round, Austion was unable to close the deficit, as Marquis Hawthorne, in a big upset, defeated the previously undefeated and heralded Austion by scores of 57-56, 58-55, 59-54.

DAVID PAPOT (22-0 3KO’s) of Saint-Nazaire France was scheduled to make his USA debut agains the tough COURTNEY PENNINGTON (12-3-2 5KO’s) on Saturday night, however two days before fight night, Pennington had to pull out of the bout due to back spasms.

Star Boxing then brought in RONALD MONTES (18-11 16KO’s) of Columbia, on short notice, to take on the tough Frenchmen. Unfortunately Montes failed his physical due to a high pulse rate and the bout was not sanctioned by the Mohegan Tribe Athletic Commission, causing it to be pulled from the card.