Manny Pacquiao has an abundance of options open to him for a fight later this year but Floyd Mayweather isn’t one of them.

That’s according to Mayweather Promotions’ Leonard Ellerbe, who continues to squash rumors of a rematch.

Mayweather was ringside to witness Pacquiao prove age is just a number against Adrien Broner. Sceptics would say Mayweather didn’t like what he saw.

Pacquiao remains as fast and dangerous as ever at 40. Whilst Mayweather is pushing 42 and could well be on a fast-track downslide.

Nothing could be gauged from Mayweather’s recent exhibition knockout of Tenshin Nasukawa as the former pound for pound king didn’t even have a training camp for the fight.

Asked what Mayweather thought of Pacquiao’s performance, Ellerbe was coy in his answer whilst offering several alternatives.

“I didn’t get a chance to ask (Floyd) about what he thought about the performance. We actually talked about some business that he had just come back from Saudi Arabia,” Ellerbe told ESPN Deportes.

“He was sitting ringside and watching as a fan, and as a promoter. And it was a very good and entertaining fight,” he added. 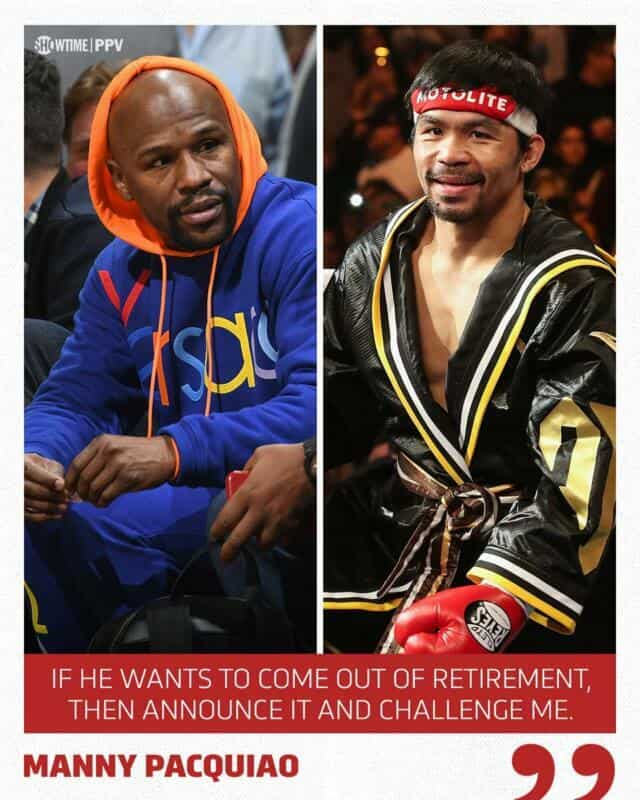 Addressing constant speculation of a return encounter, Ellerbe said: “I’m sure that anyone would want to negotiate with Floyd Mayweather. But again Floyd Mayweather is retired.

“There is a number of excellent fighters that Manny Pacquiao can fight in the welterweight division. He’s shown that he is still an elite fighter.

“There is Keith Thurman, Danny Garcia, Errol Spence, even Mikey Garcia who is fighting Errol in a welterweight clash in March, and Shawn Porter.

“The welterweight division is thriving, there are a number of great fighters, so Manny Pacquiao has unlimited options,” Mayweather’s advisor concluded.

Consequently, a unification would be the standout option. This means Thurman, Porter or the winner of Spence v Garcia is of appeal.

Danny Garcia maybe needs another big win to put his name in the hat. Adrian Granados is looking a likely opponent for April 20. A triumph over the Mexican may not be enough to secure the ‘Pacman’.

For now, Pacquiao can enjoy his triumph having pushed himself further up the pound for pound rankings.

While in contrast, Mayweather can contemplate what could be if the pair signed on the dotted line again.