Chris Algieri critical of performance despite victory on Friday

The bright lights of New York City were on full display Friday night at the Hulu Theatre at Madison Square Garden.

Former WBO Super Lightweight World Champion CHRIS ALGIERI (now, 23-3 8KO’s) and Queens native DANNY “EL GALLO” GONZALEZ (now 17-2-1 7KO’s) stepped in against each other with not only the WBO International Super Lightweight title on the line, but each knowing that a victory would put himself in line for a shot at a 140 lb. title.

Opening the action, Algieri controlled the opening rounds, showing a dedication to attacking the body, while using his agility and elite footwork to evade the offensive attempts of Gonzalez. Sitting on his punches, fighting on the outside, Algieri displayed his elite level punch rate.

Gonzalez would eventually settle in, pressuring Algieri through the second half of the scheduled ten-round bout. Gonzalez continued his aggression in an attempt to get himself back in the fight and successfully pushed the action for the remainder of the fight.

An accidental head butt, late in the seventh round, opened a cut under the left eye of Algieri. Seeing blood, Gonzalez went on the aggressive, landing a hard left hand while he pinned Algieri against the ropes. Getting into a grove, Gonzalez began putting combinations together to both the body and the head.

At the end of the 10-rounds, Gonzalez’s late offensive effort would prove to fall short, as the judges gave Algieri the nod by scores of 98-92, 97-93, 96-94. By unanimous decision, Chris Algieri earned the vacant WBO INTERNATIONAL SUPER LIGHTWEIGHT TITLE.

“I am my biggest critic, my performance wasn’t my best, but we got the W, we got the belt and I’m moving on” said Algieri. When asked about a possible title fight against MAURICE HOOKER, Algieri stated, “I can turn it up when I need it … I have always been the guy that can pull off the unexpected.” 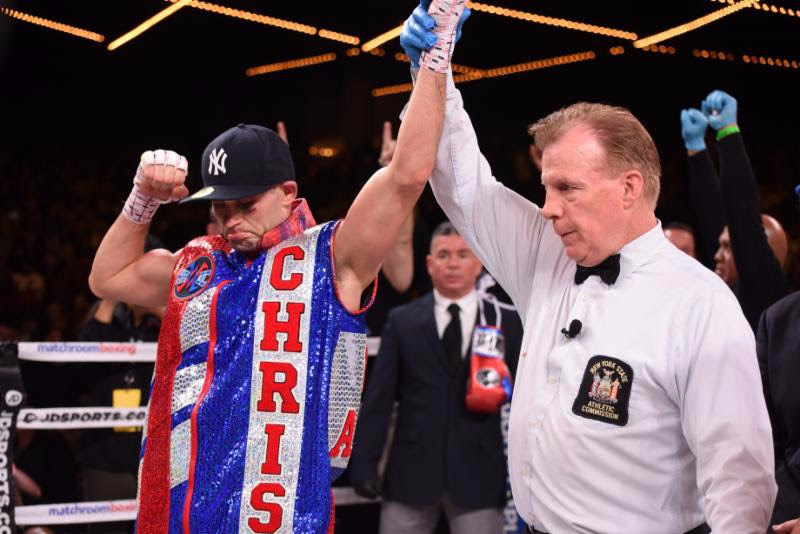 CEO of Star Boxing JOE DEGUARDIA said this about the fight, “I am proud of both Chris and Danny. It was one of the most compelling fights of the night from the perspective of fan participation and support, with a vocal crowd that was essentially split between both local fighters. Chris gutted it though a tough fight and the win puts him in line for some big matches. I was also very impressed with Danny’s performance, and believe he showed that he can hang with the elite level of the 140 lb. division. Congratulations to both men on a great fight. We will be announcing some positive steps for both of them in the coming months.”