Coachman: Broner needs to wake up, going down a very, very bad road

Jonathan Coachman discussed the behavior of Adrien Broner at a recent appearance on Sirius XM Fight Nation 93 this weekend.

The WWE commentator had his say on Broner ahead of the American’s clash with Manny Pacquiao on Saturday night.

Randy: Let me ask you this we’re talking about Adrien Broner. What he did to your colleague Hall of Famer Al Bernstein (???? Esther Lin) the other day. I mean did Bernstein say anything to you? He handled it in typical Al Bernstein fashion with class. I mean it was disgusting. What brought it to you? You got to agree right.

And that’s kind of where I always sit at with all the different things that I get to go to and be a part of it. I could not agree with you more and I hope at some point that he wakes up because if he doesn’t the road that he’s going down is going to be a very very bad one and he’s going to be sitting for a very very long time thinking God what did I do all this for?

Gerry: But you know Johnathan, I look at it a little differently. He’s coming into this fight, and he knows he’s the opponent. I don’t know if he knows if Mayweather kind of orchestrated him Against Manny Pacquiao because of Manny Pacquiao looks great against him. Maybe Floyd Mayweather can get a rematch with Pacman. So I mean this kid he’s angry because he knows he’s the opponent and he has to heel. And so he’s acting out in my opinion 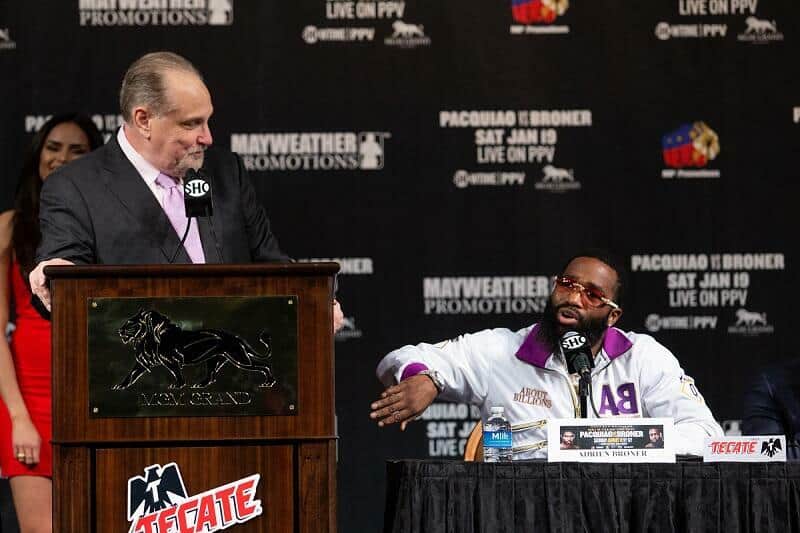 Coach: Okay Gerry and I agree with you to a certain extent. But if you want to act out that’s OK. Well, you don’t act out against Al.

Al is moderating the press conference right. Al didn’t do anything to the Adrien Broner but I do think there’s some validity to what you’re saying because today at the weigh in all of Mayweather guys were there.

Mayweather Productions has their hands all over this fight. No doubt about it. Floyd was not there today but I understand he’ll probably be there tomorrow. But if Adrian wants to be the consummate heel and a heel that some people still like then there’s ways of doing.

You don’t have to attack an announcer or somebody is going to be covering the fight. That’s not how you do it.