Adrien Broner has been assuring all he’s a reformed character of late but the old ‘Problem’ reared its head again on Wednesday.

In an unfathomable move, Broner decided to shun respected broadcaster Al Bernstein in front of the watching media during a press conference streamed live across the world.

Bernstein had gracefully agreed to stage a Q and A session between Pacquiao and Broner during proceedings. Obviously unhappy at the appointment, Broner shut down Bernstein from the get-go.

Refusing to play along, Broner also told his team not to answer any queries from Bernstein for the duration.

Reeling off profanities and engaging in the sickening name calling of Bernstein, Broner (???? Esther Lin) proved his character reforming is clearly only a facade.

Attempting to take the abhorrent events in jest, Bernstein took Broner’s antics on the chin.

“Well, quite an afternoon. I think one thing is for sure Adrien Broner will not be stopping by to hear my music performance on Friday night at @KennyDavidsen show @TuscanyCasino. I’ll Save a seat for him just in case. LOL,” said Bernstein. 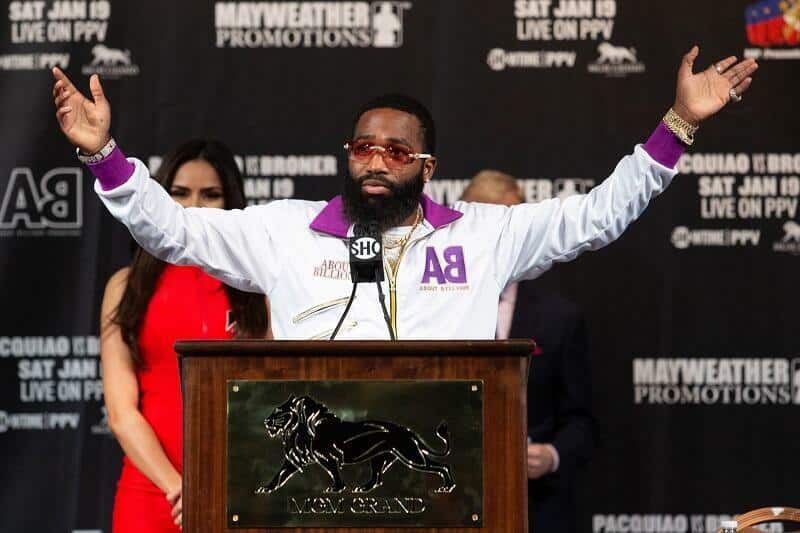 Some of the boxing personnel present to witness Broner’s horror show – in person and online – were disgusted at what transpired.

Respected reporter Keith Idec stated: “Showtime’s @AlBernstein handled @AdrienBroner calling him a b*tch-ass n*gga in this press conference about as calmly & professionally as possible. Broner said he thinks Bernstein is against him & would rather have @RealRoyJonesJr or @stephenasmith ask him questions. #PacBroner.”

“Adrien Broner just went nuclear on Al Bernstein. Called him a “bitch ass N-word” among other things. Told Al “I don’t fu— with you,” and refused to answer any questions. Al is a class act. Not cool,” said Mike Coppinger of Ring Magazine.

Hall of Fame founder, Rich Marotta added: “The treatment of @albernstein by that monumental jackass Broner is inexcusable. I hate that networks and promotions keep enabling this jerk. He never wins a big fight and then is always rewarded with bigger fight. Of all people to treat that way. Al Bernstein? Are you kidding me?“

Long-time ring announcer Michael Buffer called for action to be taken against Broner.

“Just heard about the Broner profanity-laced comments to @AlBernstein and it is disgraceful behavior toward one of the finest & most respected HOF members of the boxing community! When will commissions include licensing language forbidding & punishing this kind of vulgar behavior?

It’s uncertain at this point whether Broner will face any sanction for his behavior.

It’s yet another indication of the troublesome aura which surrounds the Cincinnati man wherever he roams.