The excitement is building as One Empreus prepares to bring its signature “I AM EMPREUS” Professional Boxing Invitational to the J.S. Dorton Arena in Raleigh, North Carolina on Friday, February 8th at 7 pm.

The star-studded, action-packed professional boxing event will be headlined by North Carolina’s most dynamic fighter, undefeated prospect “The Boy Wonder”/”150%” Michael Williams Jr.; with a special appearance by all-time great and former world champion the one and only Roy Jones Jr.

Arguably, the best fighter in the state of North Carolina, Williams Jr. brings a unique brand of athleticism, showmanship, charisma, power, and talent to the ring.

Williams Jr’s marketability and meteoric rise in the world of boxing guarantee a night of explosive entertainment.

Jones Jr. is considered by many to be the greatest fighter to ever lace on a pair of gloves. A champion like no other; Roy Jones Jr.’s legendary boxing career saw him decimate opponents in multiple weight classes.

Leading him to win world titles in four different divisions. He capped a sensational career by winning the Heavyweight title in 2003.

He is the only professional fighter to begin his career at Jr Middleweight and go on to win a Heavyweight title. The world-renowned actor, rapper, boxing commentator, and trainer plays an integral role in the exciting career of Michael Williams Jr. 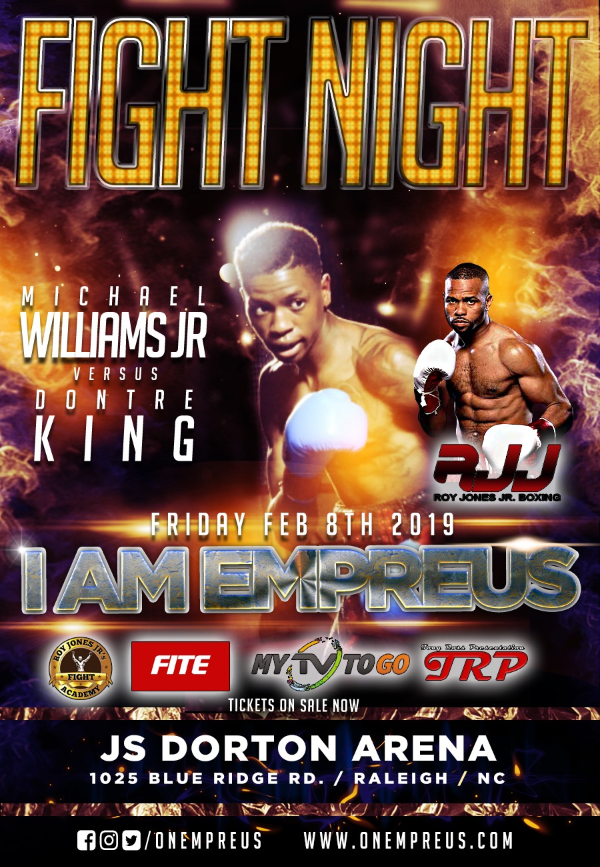 One Empreus will elevate this boxing event with some of the best and most popular fighters in the area.