Tickets for the event, which is promoted by MP Promotions, Mayweather Promotions and TGB Promotions in association with About Billions Promotions, are on sale now and start at $100. Not including applicable service charges, and can be purchased online through AXS.com.

Pacquiao (???? Esther Lin) will end his two-year hiatus from a U.S. boxing ring when he returns to Las Vegas to defend his title against Broner.

Along with co-trainer Buboy Fernandez and longtime trainer Freddie Roach, Pacquiao spoke to media and worked out for the cameras at Wild Card Boxing Club.

“My journey in this sport is still continuing. I’ve accomplished everything I’ve wanted to. But I also want to continue to keep my name at the top.

“Even at 40-years-old, I can still show the best of Manny Pacquiao. I’m going to give the fans the speed and power that they’re used to seeing,” said Pacquiao.

“I’m sure that Broner is focused on this fight. They are working hard and I expect him to be in great condition. We know how his trainer pushes him and has been pushing him in their training camp.

“I’m not taking this fight lightly. I don’t listen to any gossip about Adrien Broner, I just focus on my training. I want to be in 100 percent condition and ready for the fight on January 19. 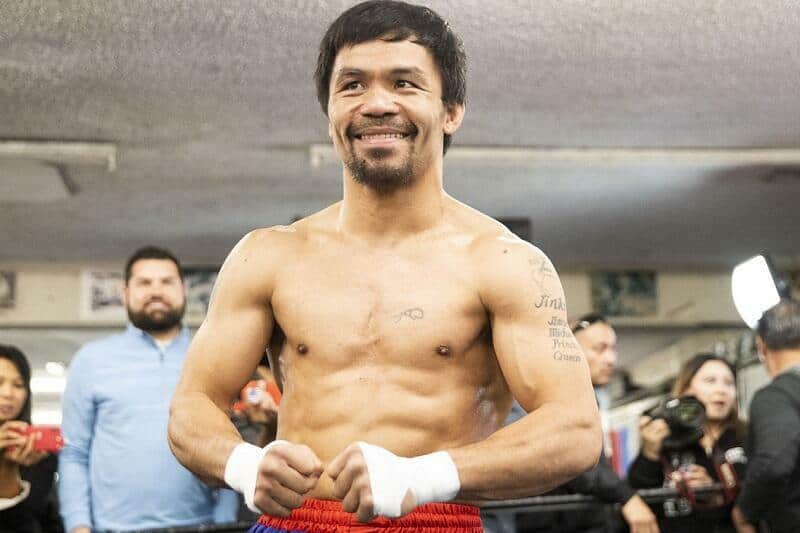 “Adrien Broner is fast with his hands and he’s overall a good boxer. This is a big challenge that I’m excited for.

“Me, Freddie and Buboy know each other well and we have a great coaching staff right now. I’m happy with how everything has gone in training for this fight.

“Rest and recovery is definitely a key part of training. Sometimes when I work hard in the gym, my body can’t fully recover by the next day. So I’ve had to work more rest into the schedule. But as soon as I can, I’m back in the gym working hard.

“On January 19 I’m going to do my best. I can’t say a prediction, but I’m going to do the same thing I did for my last fight. My trainers know how hard I’ve worked in this camp for this win.

“My plan is to take it one fight at a time. I can’t talk about future fights (Floyd Mayweather) until I do what I have to on January 19. You can ask me again after this one.

“This fight means a lot. It’s my first fight at the age of 40 so I’m excited to give my best and show the world what I can still do.

“Boxing is my passion, and public service is my mission. I love to bring honor to my country.”

Pacquiao vs. Broner is headlined by Senator Manny “Pacman” Pacquiao is boxing’s only eight-division world champion. He is ending his two-year hiatus from a U.S. boxing ring to defend his World Boxing Association Welterweight World Title against former four-division world champion and must-see attraction Adrien “The Problem” Broner.

The fight happens Saturday, January 19 in the main event of a SHOWTIME PPV® event from the MGM Grand Garden Arena in Las Vegas.