Tenshin Nasukawa is set to go back to his day job as a kickboxer after admitting he was reckless in his bid to defeat the great Floyd Mayweather.

The 20 year-old went gung-ho against the former pound for pound king in a bid to make a name for himself on New Year’s Eve.

Tenshin’s plan backfired as he was dropped three times on the way to a crushing first round loss. Nasukawa was even in tears as Mayweather tried to console him with the winner’s trophy.

Looking back on his performance, Tenshin said he wouldn’t change his tactics if he had another chance to face Mayweather.

“It was a challenge to fight with Mayweather. I was being reckless. The result was me being knocked down. Saying that, I do not regret it,” said Nasukawa.

“I did well to fight Mayweather at just 20 years old. I came into the fight with courage.

“I could not defeat Mayweather. But I will continue to challenge the best from now on.

“To everyone, thank you and Happy New Year,” he added. 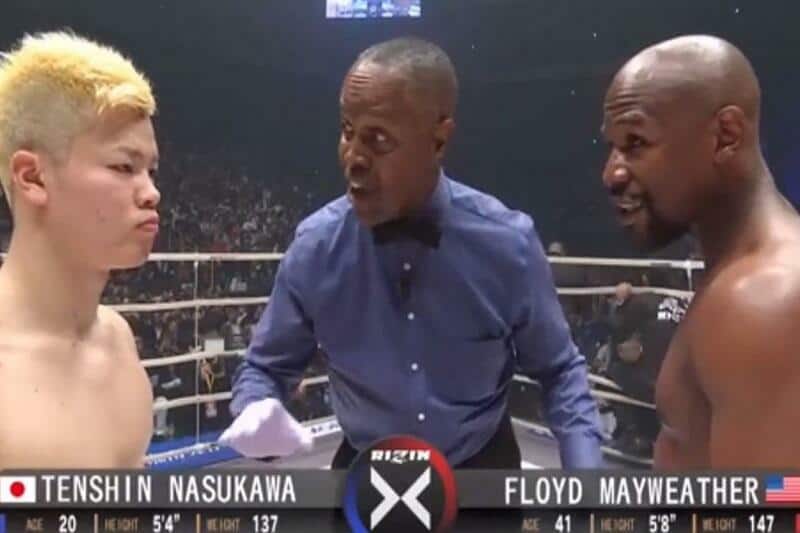 As Mayweather moves on to a potential rematch with Manny Pacquiao, Tenshin has an undefeated kickboxing record to defend.

At 28-0, Nasuakawa remains one of the best fighters in his division. Giving away two stone to Mayweather, the Japanese star can head back down to his own weight class with confidence.

Prior to the Mayweather loss, Tenshin had scored five wins in 2018 alone, claiming two stoppages from that quintet of outings.

Most recently, Taiki Naito was taken out in under two minutes, cementing Tenshin’s place as one of the best kickboxers in the world.

For Mayweather, earning just under $4 million per minute could lead to another huge payday against Pacquiao in Las Vegas over the coming months.

Pacquiao needs to come through Adrien Broner in order to open negotiations over a rematch of their most lucrative fight in 2015.