Former world champion Tony Bellew has had over a month to reflect on the final fight of his career against Oleksandr Usyk.

In an exclusive interview, Bellew spoke with WBN about his courageous attempt for the undisputed world cruiserweight title against the pound for pound star.

Looking back, Bellew was asked how he feels now it’s all over.

“I don’t know. I can’t think of the best way to explain it, for the first time in my career I got tired in a fight,” Bellew exclusively told World Boxing News.

“It was the first time I could actually say I was exhausted. I don’t remember much of the eighth round, I remember getting back up, just about.”

On an exciting night, Bellew proved to the world he belonged on the top stage. ‘The Bomber’ won multiple rounds against the defending champion and was ahead on the scorecards.

“I’m gutted obviously by the end result but the fight was going very much to plan,” he explained. “I felt like I was winning going into the eighth round and we were getting closer. Everything went to plan and it was everything I expected.

“I knew he was a good boxer but I knew I could outbox him. The plan was to get him to start chasing the fight in the second half and get him to walk onto a big punch.

“The fact of the matter is he just didn’t in the end. The only big punch I threw was the one I threw when I was too tired in the eighth round. 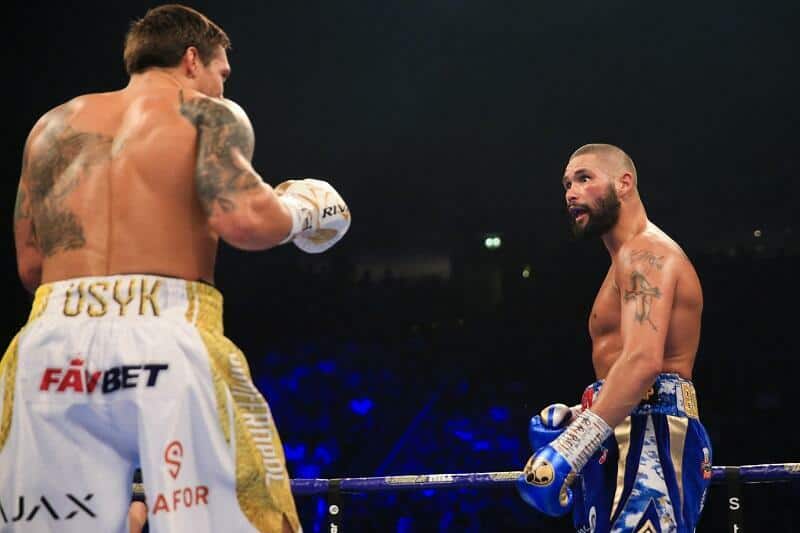 “So fair play to Oleksandr Usyk, he outclassed me and I just couldn’t keep up.

“Why I tired I don’t know as I was in amazing shape and I felt fantastic. I wasn’t shocked to see I was outboxing this man and getting the better of it.

“I knew there was a shot I could do it. I’ve always known how good he was, but I also know how good I can be on my day.”

After back to back KO victories against former cruiserweight and heavyweight champion David Haye, Bellew became a UK Pay-Per-View star.

Already securing his family’s future from the Haye fights, ‘He Who Dares’ was one last push for a lasting legacy.

Despite the loss, Bellew’s performance was enough to show it was mission accomplished.

Concluding his thoughts on what was the final bout of his career, Bellew said: “It was a very hard defeat for me to take but I’ve come to terms with it now and he won.

“It’s been a great journey, I’m happy with what I’ve done. I’ve achieved more than I could have dreamed of. I can’t complain, I’m very, very happy.”