The battle will take place on Saturday, December 15 at Madison Square Garden in New York City and will be streamed live on DAZN – which, at just $9.99 per month after a one-month free trial, means new subscribers to DAZN will enjoy the entire Canelo vs. Rocky fight night for free.

They were joined by David Lemieux (40-4, 34 KOs), who will look to make a second potential Knockout of the Year performance before 2018 ends as he takes on Tureano Johnson (20-2, 14 KOs) in the scheduled 12-round co-main event.

Below is what the fighters had to say at the grand arrivals:

“I’m 100 percent focused on Saturday. It will be an interesting fight. I’m entering the comfort zone of the champion. He’s used to fighting bigger people. He’s used to taking bigger punches.

£It’s no secret that I’m a better fighter. I also have more experience. But moving up in weight levels the playing field. It’s a risk and a challenge. I like challenges so that’s why I’m doing this. I do this to be satisfied with myself and my career. It is very important to enter into the history of Mexican boxing.

“It’ll be interesting to see how the fight develops. Without a doubt, I will give everything in the ring. I hope he does so too, so we can give a great fight to the fans.” 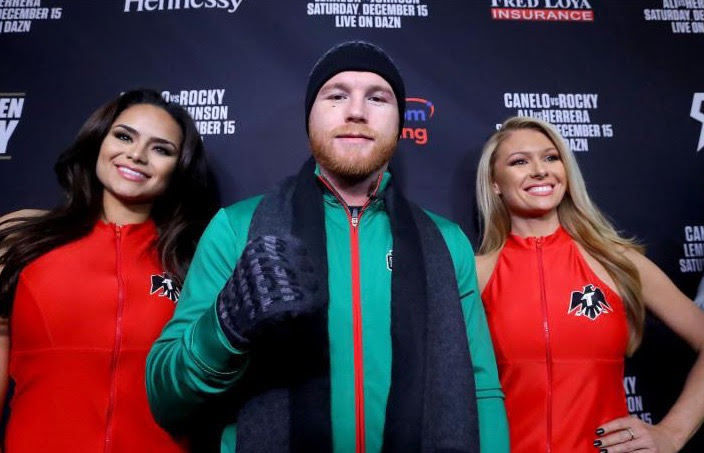 “This is the sort of fight you dream of. But I’m the champion at this weight. I’m focused on defending my title. We know what Canelo brings. We know what we are up against. We’ve trained hard.

“I’ve covered all the bases. Jamie Moore and I have some great tactics we’ve been working on. I’m ready to get in there.”

“Tureano is in for a big surprise on Saturday. I’m not coming here to lose. I’m coming here to look spectacular. I’m here to make a big statement so I can get the fight I want. Tureano is a respectful opponent. I haven’t gotten to know him that much. But business is business. When I’m in the ring, I’m devastating. I took only one week off after my last fight. I’m in beast mode right now, and you will all see that this Saturday. The round I finish this will depend on Johnson, but the knockout will happen.”

“After being in boxing for so long, you have to grow, and you have to adapt. Indeed, David Lemieux is a ferocious puncher. He is a devastating puncher. You definitely don’t want to get hit with any of his blows. I know what it’s like to get hit by devastating punches, and I don’t want to get hit by them again. But, we have a trick for that. We have a real good trick for that. It’s a treat for the fans. Come Saturday, fans will be in for a great fight.”

“Nothing feels better than fighting in my own home town. I’m excited. I’m ready. It’s nice to be coming back down to my original weight. It’s a little hard because my last two fights were at 154, but 147 pounds is my original weight.

“It’s a great card. I’m ready to go out there to perform and show what I got.”

“I’m going into the fight to do my thing. If the judges want to see it, they’ll see it. I’m a fighter. I keep fighting. Whatever happens in the past is the past. Nothing can break me, and I just keep moving forward.

Canelo vs. Rocky is a 12-round fight for the WBA Super Middleweight World Title presented by Golden Boy Promotions in association with Matchroom Boxing. Lemieux vs. Johnson is a 12-round middleweight fight presented by Golden Boy Promotions and Eye of The Tiger  Management. The event is sponsored by Tecate, “THE OFFICIAL BEER OF BOXING,” Hennessy “Never Stop. Never Settle,” Fred Loya Insurance and “Miss Bala.” The event will take place Saturday, December 15 at Madison Square Garden in New York City and will be streamed live on DAZN – which, at just $9.99 per month after a one-month free trial, means new subscribers to DAZN will enjoy the entire Canelo vs. Rocky fight night for free. Watch the series premiere of DAZN’s first original episodic program, THE JOURNEY: CANELO/ROCKY, to go behind the scenes as Canelo Alvarez and Rocky Fielding prepare for their historic showdown.

Globally, DAZN is a live and on-demand sports streaming service created by fans, for fans, that is leading the charge to provide access to sports anytime, anywhere. DAZN guarantees no long-term contract, no bundles, just one affordable price for access to all the service’s sports on connected devices including Smart TVs, smartphones, tablets, games consoles and PCs. DAZN is currently available in Germany, Austria, Switzerland, Japan, Canada, Italy and now the U.S. at just $9.99 per month after a one-month free trial – where it is set to become a must-have service for fight fans, with 100+ fight nights already lined up from Matchroom Boxing, Bellator MMA, the World Boxing Super Series, Combate Americas and the newly announced Golden Boy Promotions.