Top lightweight Teofimo Lopez scored an explosive 44-second knockout over Mason Menard this past Saturday night at The Hulu Theater at Madison Square Garden in a scheduled ten-round bout that was viewed by a massive audience on ESPN.

Lopez landed a crushing right hand that had Menard plummeting face-first on to the cnavas, in what was the opening televised bout on the Vasilly Lomachenko – Jose Pedraza lightweight unification card.

Lopez is now the NABA, NABF and USBA Lightweight champion.

The knockout, was featured on ESPN SportCenter, and all over social media, took place on an event which was the 2nd highest rated boxing card on cable television this year

With the win, Lopez ‘(pictured by Mikey Williams)’ pushed his perfect mark to 11-0 with nine knockouts, and now he feels he is ready for anybody in the lightweight division.

“I knew he was a tough fighter. I knew he could fight,” Lopez said. “I wanted to test him, and I took a chance early in the fight. I know he trained hard, and he didn’t want it to go that way. But this is ‘The Takeover.’ ‘The Takeover’ has begun.

“I put an exclamation point that I am no longer a prospect, and now it’s on to the contenders, and moving up the rankings. In 2019 you will see me fight for a world title.” 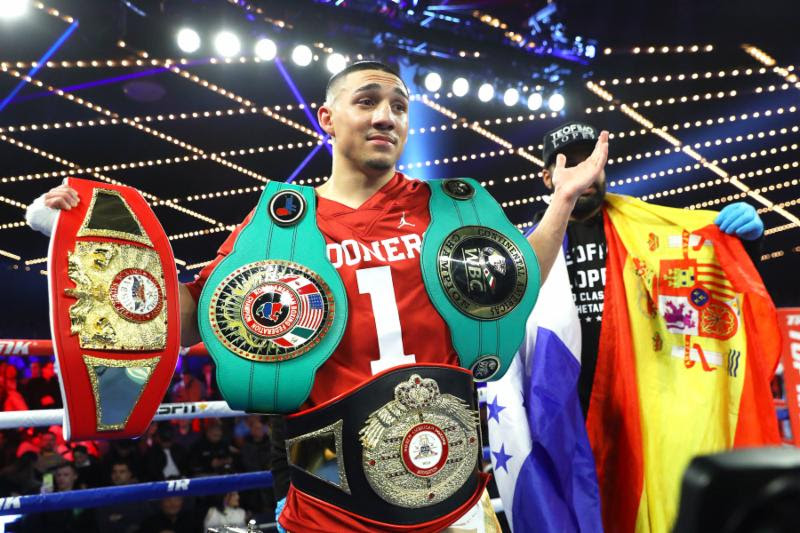 Said Lopez manger, David McWater of Split T Management, “He’s just never stops surprising me. Just when you think he can’t do better than his last fight he does something even more amazing. It’s been a generation since boxing saw a young fighter like this”